A World Without Food Security

This map, published in today's  Guardian, is an eye opener.   It charts how much of the world faces food insecurity.   That, by the way, is all of the world except those countries coloured green. 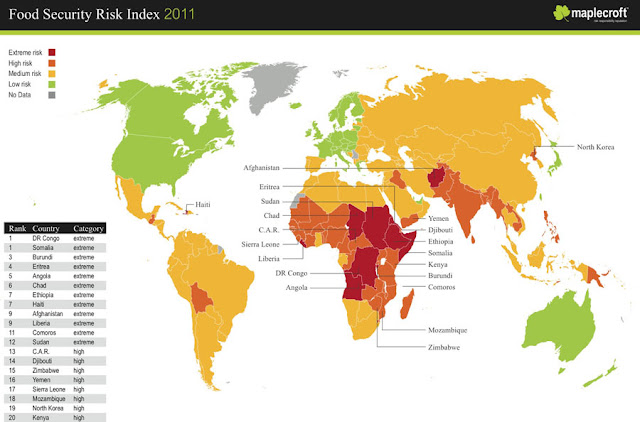 Get the picture?   North America (excluding Mexico), Western Europe (excluding Spain), Iceland, Japan, Australia and New Zealand - that's the lot.   This is the Maplecroft Food Security Risk Index, 2011.  This is a world of 7-billion people, racing toward 9-billion even as the ravages of climate change close in on it.

Look at the hardest hit countries - Afghanistan, Iraq, Congo, Somalia, Sudan,  North Korea, Yemen, India, Pakistan, Burma.   These are countries either in conflict or hovering on the brink of conflict.

But wait, there's more.   Who are the biggest carbon emitters?  China and the United States, of course.  And where is public concern over global warming falling markedly?   You guessed it, China and the United States.   Less than half of Americans say they're concerned about global warming which is no small comfort to the Big Carbon lobby and their bought and paid for minions, the US Congress.  And, in China, which itself faces food insecurity, concern has dropped from 77% in 2009 to 64% today.

With the United States utterly hostile to any effective global emissions control agreement and China nearing indifference, we're simply screwed.  That means us too, all the greenies in that map above.  We'll probably be the last and least impacted, barring all out war (which is a very real possibility), but we'll still be hit eventually.

What else can we expect from political leaders who, in Jared Diamond's words, "consider leaving environmental problems unsolved a money-saving device."

In his fascinating book, Collapse, Diamond wrote "...some people may reason correctly that they can advance their own interests by behavior harmful to other people. Scientists terms such behavior "rational" precisely because it employs correct reasoning, even though it may be morally reprehensible. The perpetrators know they will often get away with their bad behavior, especially if there is no law against it or if the law isn't effectively enforced. They feel safe because the perpetrators are typically concentrated (few in number) and highly motivated by the prospect of reaping big, certain, and immediate profits, while the losses are spread over large numbers of individuals."

That passage pretty much explains the Athabasca Tar Sands in a nutshell.   Our supposed leaders treat ignoring the environmental problems as a money-saving device.
Posted by The Mound of Sound at 8:43 AM

If our leaders were using the short-term money savings of the Tar Sands in order to invest in some long-term project to improve Canadian society, that would be one thing. We'd be able to look at and balance the long-term loss from the environmental issues against the long-term gain of whatever great goal they chose to work towards.

Except that's not what they're doing at all. Any gains from the tar sands are most expediently funneled to foreign-owned immoral corporations and shuffled over the border to the USA. Alberta receives more revenues from its casinos than from oilsands royalties. Our leaders have chosen to accept long-term costs AND give up short term gains, and for what?

Canada has always sold inself down the tubes regarding money made for Canadians. All they have ever nogociated are jobs. Take a good look at Norway. They get 80% of the money made from their oil and that includes the big boss Exxon Mobile with 20%. How do you think they were able to do that? Certainly not by standing bent over, hat in hand begging "please"!!