"The PLA seeks the capability to deter Taiwan independence and influence Taiwan to settle the dispute on Beijing’s terms. In pursuit of this objective, Beijing is developing capabilities intended to deter, delay, or deny possible U.S. support for the island in the event of conflict. The balance of cross-Strait military forces and capabilities continues to shift in the mainland’s favor." 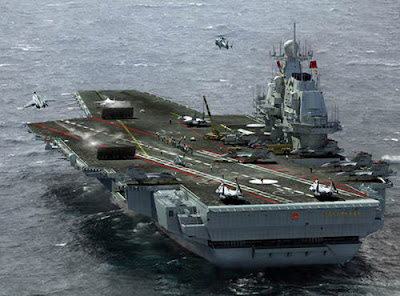 That was the essence of a report entitled "Military and Security Developments Involving the People's Republic of China, 2011" delivered by the Pentagon to the US Congress.   It could more properly be titled, "Threats to American Hegemony in East Asia."

The 54-page report is full of gems.  Great attention is paid to the expansion of China's air and naval forces required to dominate and potentially repel American forces from Chinese territorial seas.  The Pentagon is used to maintaining superiority of naval and air forces right up to China's territorial limits and the report almost winces at the thought of that being forever lost.

The paper focuses on the development of Chinese naval air power.  The country is just finishing the refit of a Russian-built carrier the Chinese picked up from Ukraine.  The report notes that China is expected to begin building its own carrier fleet very soon.

America isn't the only potential threat China faces.   The Indian Navy, the world's fifth largest, is also rapidly bulking up, especially its Eastern Command.   India is positioning an aircraft carrier, all of its guided missile destroyers, and its submarine fleet including the three nuclear boats soon to be in service.   The Chinese navy is predicted to establish a permanent presence in the Bay of Bengal and the Indian Ocean even as the Indian navy has a stated goal of establishing maritime supremacy as far east as the Kurile Islands, effectively blanketing China's entire coastline.  See where this is heading?
Posted by The Mound of Sound at 11:08 AM

"See where this is heading?"

It was bad enough when it was just the USA and the USSR and even then there were times when they very very nearly pushed the button.

A multi-way increase in military tension between nuclear powers is a scary thing. First you build up your military, next you make secret alliances with other powers to protect your hegemony, and then someone assassinates Archduke Franz Ferdinand.

Actually, no, I'd rather not. Years ago I had to study the theories of escalation in nuclear warfare, how it all can spin out of control so very quickly. Next time I don't think it'll be a gunshot in Sarajevo but it could well be a desperate dispute over Himalayan headwaters.