An Army of One? Well, Not Quite. 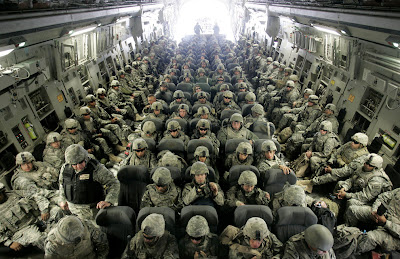 It sounds as though the Pentagon has had about a belly full of decadal, inconclusive ground wars of the sort it found in Iraq and Afghanistan.   Goodbye Army.   Hello Air Force, Hello Navy.

If armies make much sense at all today it's in the "whack a mole" mission of swatting at insurgents or anyone who happens to sort of look like an insurgent.   That last line is code for Afghanistan.  Armies just aren't a lot of good these days when you've got bigger fish to fry - and that's code for China.

Korea and Vietnam taught America to forget about land wars in the Orient.  Iraq and Afghanistan have conveyed a somewhat similar message concerning the Muslim world.   No point constantly winning a war that can always outlast you.  It's the military equivalent of treading shark-filled waters.

Washington Post columnist David Ignatius writes that the Pentagon is about to give the Army budget a very trim haircut.

"Budget pressures have curbed the appetite for the ambitious, “protect-the-population” missions that were promoted with such enthusiasm by Gen. David Petraeus and Gen. Stanley McChrystal.

“It’s not going to be likely that we will deploy 150,000 troops to an area the way we did in Afghanistan and Iraq,” said one top Pentagon official, explaining the rationale for Panetta’s budget review.

"Panetta has been signaling for several months that the Army and Marines, which have carried the fight in Iraq and Afghanistan, will be cut in his 2013 budget. His final recommendations won’t be finished until year-end, but the Army and the Marines are already planning force reductions, recognizing that new and prolonged, large-scale counterinsurgency missions aren’t likely anytime soon.

"A second big theme of Panetta’s review is an emphasis on Asia — and on countering China’s growing military power there.

"The practical impact of this Asia tilt will be to boost relative spending for the Navy and Air Force, which are America’s traditional means of projecting military power in the Pacific. Pentagon officials caution, however, that the Centcom region — an arc of instability from Morocco to Pakistan — will also remain a top priority, and won’t be starved for resources to pay for the new emphasis on Asia."

Bring on the drones.  This realignment away from divisions of ground troops deployed to little lasting avail in marginally consequential distant lands suggests America now may prefer to fight its foreign wars from home.  Drones "piloted" by satellite relay from some climate controlled trailer on a US air base in Florida may just be the new flavour of the month in American firepower.  Drones and guided missiles, submarines and cruise missiles, long-range bombers and aircraft carriers may provide the response of choice in the Third World.  It sounds that the US Army's own "occupy" movement is in imminent danger of eviction.
Posted by The Mound of Sound at 8:00 AM

Email ThisBlogThis!Share to TwitterShare to FacebookShare to Pinterest
Labels: US Army