Krugman Warns It's a Depression and Democracy Itself is at Risk 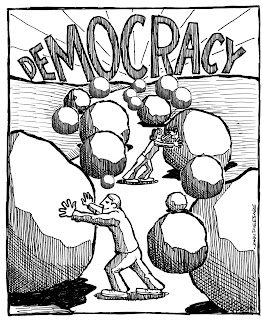 New York Times columnist and Nobel laureate economist Paul Krugman is now calling the developed world's meltdown a depression.   And he's warning that we'd better wake up to the threat that poses to our democracy.

"True, it’s not a full replay of the Great Depression, but that’s cold comfort. Unemployment in both America and Europe remains disastrously high. Leaders and institutions are increasingly discredited. And democratic values are under siege.

"On that last point, I am not being alarmist. On the political as on the economic front it’s important not to fall into the “not as bad as” trap. High unemployment isn’t O.K. just because it hasn’t hit 1933 levels; ominous political trends shouldn’t be dismissed just because there’s no Hitler in sight.

"...demands for ever-harsher austerity, with no offsetting effort to foster growth, have done double damage. They have failed as economic policy, worsening unemployment without restoring confidence; a Europe-wide recession now looks likely even if the immediate threat of financial crisis is contained. And they have created immense anger, with many Europeans furious at what is perceived, fairly or unfairly (or actually a bit of both), as a heavy-handed exercise of German power.


"Nobody familiar with Europe’s history can look at this resurgence of hostility without feeling a shiver. Yet there may be worse things happening.


"Right-wing populists are on the rise from Austria, where the Freedom Party (whose leader used to have neo-Nazi connections) runs neck-and-neck in the polls with established parties, to Finland, where the anti-immigrant True Finns party had a strong electoral showing last April. And these are rich countries whose economies have held up fairly well. Matters look even more ominous in the poorer nations of Central and Eastern Europe.

"...Taken together, all this amounts to the re-establishment of authoritarian rule, under a paper-thin veneer of democracy, in the heart of Europe. And it’s a sample of what may happen much more widely if this depression continues."

Canadians have no reason to be complacent about the rise of authoritarian government in Europe, not while we have Stephen Harper's secretive, duplicitous and manipulative one-man rule.   The man who came to power promising transparency and accountability has revealed himself, instead, a prince of democratic darkness.  Harper's winning tactic is to devour Canadian democracy in little bites but his subtlety may mask a ravenous appetite.

— and has been following the Hungarian situation closely — tells me that Fidesz is relying on overlapping measures to suppress opposition. A proposed election law creates gerrymandered districts designed to make it almost impossible for other parties to form a government; judicial independence has been compromised, and the courts packed with party loyalists; state-run media have been converted into party organs, and there’s a crackdown on independent media; and a proposed constitutional addendum would effectively criminalize the leading leftist party.

Sound familiar? It should, it's a Harpercon's wet dream.

Most media outlets have turned into nothing more than propoganda machines for the Harpercons.

That new Bill C-20, is it? You know, the bill that folks from Ontario, BC and Alberta are all crowing about, including some progressives, as some sorta victory for democracy, should think again and be careful what they wish for. The Harpercons will be gerrymandering those ridings to ensure they remain in gov't forever, just like Hungary's Fidesz.

Judicial independence? Bill C-10, anyone? Or how about how they're blatantly ignoring the court ruling regarding their bill scrapping the Canadian Wheat Board? More retirees to come on the Supreme Court. Won't be long before that's good stuffed like a Harpercon Thanksgiving turkey.

Changing the constitution to criminalize left leaning parties? Yep, I can see 'em doin' that. After all, they proved that they want to criminalize left leaning dissent at Toronto G20, so is criminalizing any opposition parties such a stretch? Many talk and scream about re-opening constitution for this and that. What they fail to realize is that our constitution is largely unwritten convention and easily manipulated by someone like Steve Harper. Con MP Michael Chong confirmed this much at a presentation he gave at McGill last year.

Funny about those Hungarians. You'd think that after decades of authoritarian Communist rule behind the iron curtain, why would they exchange their democracy for right winged fascism, which I argue would be as bad, if not, even worse than Communism?

Harper is a Reformer and a Neo-Nazi. He founded the Northern Foundation Party. They said, the skinheads assisted Harper to organize his fascist party. This was in 1989.

It is seeming to escape peoples minds. Harper is controlling everything he can get his hands on. He had to get the media under his control, they are now Harper's propaganda machines. Harper did not dare, have the Canadian people remembering about his shady political past.

Harper even had Guelph University stormed, to stop the students from voting. They even tried to steal the ballot boxes.

Harper even tried to get the, Canadian Wheat Board under his control.

Harper had the gall, to force the destitute F.N. in northern Ontario, to pay $1,300 per day for a money manager. What a stupid idiot.

If anyone should have money taken away from him, it's Harper. He has wasted billions, giving our tax dollars, to the wealthiest corporations in the world.

Harper and his ministers, don't even have to worry about Harper's tough on crime. They thieve our tax dollars, at their will. $50 million for gazebo's. $3 million for, just one member's travel expenses. Who can forget the one billion dollars Harper wasted, on a stupid fake lake.

Harper needs to be forced to resign. He has mistreated the F.N. citizens all across Canada, like dirt.. That adorable tiny baby girl that died, was from pure neglect, of Harper's health care for the F.N. Harper's negligence of the F.N. Has gone on, every day he has been in office. A $1 billion dollar fake lake, would have helped many F.N.people.

As every good dictator does, Harper shifted the blame of his negligence of the F.N. onto them. We aren't buying that.

Krugman forgot to mention a few other delightful parties in Europe that were recently elected as at least, part of governing coalitions.

Not that long ago, about a year, I think, in Sweden, another country that appeared to have faired the economic crisis well, is another example. IN their last general election, for the first time in a long time, at least, Swedes voted in a far-right party with neo-Nazi roots. While they are not the governing party, they do hold the balance of power in a coalition.

Let's not forget the Netherlands' general elections last year, which yielded an entirely center-right coalition, albeit a minority that needs to be propped up by, you guessed it, the wingnut Islamophobe, Geert Wilders and his far right Freedom Party.

The reasoning for this, as well as for perhaps the Finns and other European countries, and something else Krugman failed to mention (he's excused, he's not an Anthropologist), but is very important, nonetheless, is that many Europeans have been hearing the dog whistles of "Islam is taking over" due to increased immigration from the Middle-East in some parts of Europe. Hell, they heard the rallying paranoid cries of the likes of Geert Wilders, yelping how Europe will be taken over by Sharia Law if Muslim Immigration isn't curbed and curbed now. Adding fuel to this fire is they see these immigrants as unemployed and unemployable and only benefitting from generous social programs (in the case of Sweden and Norway to some degree) without contributing to the host country. It doesn't help when we have self-hating Muslims like Tarek Fatah and Salim Mansur travelling and yelping and being those neo-Nazi's useful idiots.

Oh, and about two years ago, a poll was taken in Germany. Revealed that 1/12 Germans want "strong-handed fuhrer" back in power.

Krugman also forgot to mention the recent election of the center right People's Party in Spain under Mariano Rajoy--a man who, other than to promise more austerity and more draconian measures than Socialist predecessor Zapatero could've dreamed of, had a rather vague platform.

Oh, I forgot, he does plan to move Spain backwards. Abortion will be recriminalized under him.

Also, some cultural course given to school children, one that the Catholic Church had been protesting against as too much anti-Christian and too much left-winged indoctrination, will also be nixed under Rajoy. See the pattern of paranoia, here? No dissent allowed, potentially? Worse, Catholic Church back in government fold?

Oh, and the People's Party do have a large faction (I believe that PM-elect, Rajoy is one of them) who aim to bring back the good ol' days of none other than their hero, Francisco Franco.

Can things get more depressing. This century so far has proven to be devastating given any progress made in the last century.

Is there a freaking silver lining to be found in any of this? The divide and conquer racist scare mongering about dark, Muslim immigrants has been used very effectively to fracture the working and non-working classes. It's an ugly but unfortunate distraction that is leading to these horrific electoral results.

I think I'm ready to immigrate to Iceland.

I hear Iceland is nice this time of year.

I, too, would love to immigrate there.

Fear not. If enough of you emigrate to my island we'll have enough to secede.

And about Harper being a Nazi? That's probably an overstatement. That linked blog post seemed short on details and long on reading-between-the-lines. I don't know what role Harper had in this Northern Foundation Party? Was it really his party, or did he just belong to it? Was it a Nazi party, or did Nazi's just not hate it? The form of that blog post looks similar to right-wing-style paranoia: surrounding Obama/Bill Ayers for example.

Anyway, regardless, there's enough evidence that Harper was one angry dude in his youth and never grew out of it. If only the internet had been invented 10 years earlier, the easiest way of satisfying his id would have been blogging, instead of party politics.

Given future forecast from everything that has been said here, why would you think immigrating to Ice Land or Vancouver Island would do it for you? This is not 1939 but 2012 almost and hopping from one country to another is soooooo very easy these days. Running away is what happened in the run up to 1939.

Actually Anon, migration is a natural response, not a solution. Climate migration is already happening and the Europeans are deeply concerned about refugees pouring in from Africa. The United States faces a similar challenge out of Central America. This will be coupled with internal displacement from storm events and coastal inundation as well as mega-drought now setting in across the American southwest. Like it or not, Canada will not be immune to this.