Just Askin' That's All. Is the F-35 Still Stealthy? 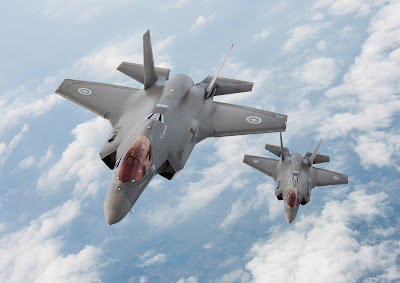 Early American stealth technology, the F-117 kind, relied heavily on angled plates and special paint to prevent radar waves from being returned to enemy receivers.   The current stealth technology relies on curved surfaces and anti-radar coatings to prevent radar waves from beaming back to enemy receivers.   This technology is used on everything from the B-2 bomber, the F-22 Raptor super-fighter, the F-35 poor cousin stealth fighter, and - wait for it - the RQ-170 stealth spy drone.

Even the Pentagon admits that the Iranians now have one of those fancy RQ-170 drones.   The Americans think it crashed inside Iran.   The Iranians claim they managed to electronically hijack the drone and bring it down for a safe landing.

Whether the Iranians have an intact RQ-170 drone or merely the wreckage may not matter much.   Either way they now have the keys to the materials, design and electronic stealth secrets the Americans devised.   With that information in Iranian (not to mention Chinese and Russian) hands, some of it may be able to be copied by our potential adversaries.   Worse yet, the more technologically advanced countries may well be able to explore this technology to discern vulnerabilities, weaknesses and then devise defensive and offensive systems to overcome the stealth advantage the US and her allies are paying oh so very dearly for in the F-35.

The question then becomes what impact does Iran's RQ-170 have on the lifetime usefulness and value of the F-35?   Is the F-35 now a lame duck?
Posted by The Mound of Sound at 6:33 PM

I don't think it is likely that having a drone would make it any easier for the Iranians to develop radar to better detect stealth drones or fighters.

But, like you say, it should advance the hour when the Iranian can build their own drones or other stealth/spy munitions. And this is probably much more concerning.

Chris, it's not the Iranians I worry about. It's the Russians and the Chinese, the very nations the F-35 designers had in mind for this aircraft. They have the science and technology to unravel the RQ-170 secrets, to dissect America's second-generation stealth technology, to identify its vulnerabilities while reverse engineering it to copy or even improve what they can glean.

The F-35's potential adversaries will have access to America's stealth technology years before it will even show up in Canadian Air Force hangars. The Americans have said as much.

In my view this is a game changer. We should ditch the F-35 in favour of more capable and less expensive alternatives and use the balance to fund our own stealth counter-measures programmes. The Australians have already revealed that while the F-35 works pretty well to defeat X-band radars of the type fitted to tiny fighter nosecones it's relatively ineffective against the larger arrays of L-band radars. That's why the Russians are working to retrofit L-band radars in the leading edges of their fighters' wings.