WTF? China is Driving Canada's Purchase of the F-35? 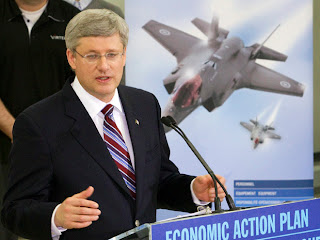 If you have any doubt about how feeble Canada's corporate media have become you need only read the PostMedia scribe Matthew Fisher's article proclaiming that "Canada will buy F-35 joint strike fighter, no matter the cost."

This joker has the critical thinking skills of a 6-year old at Christmas.  Who is feeding Fisher information is unknown but his appetite for gullibility is plainly insatiable.

Fisher says that Japan's decision to buy the F-35 means everyone else will too.

There is no chance that Canada will cancel its order for about 65 F-35 joint strike fighters.

That fact was underlined again this week with reports from Japan that before Christmas, Tokyo will announce its intention to buy as many as 50 of the state-ofthe-art stealth warplanes.

Fisher assures Canadian readers that Japan even considered rival aircraft including the Eurofighter Typhoon and the F-18 Superhornet.  In other words, Japan has done all the looking anyone needed.  It didn't occur to the astonishingly simplistic Fisher that Japan would have considered the competition, even if superficially, according to Japanese requirements or that Japan's situation might be vastly different than Canada's.  It's all one-size-fits-all for PostMediaBoy.


Hmm, now let me see.  Just how big is Japan?  How big is Canada? Who are its neighbours?   What sorts of potential threats do they present?  How does that compare with Canada?  How much space does Japan have to defend?   Canada?  What other aircraft does Japan operate and how will they be used in conjunction with the F-35s if they ever materialize?  What support aircraft - refueling tankers, airborne warning and control aircraft - does Japan operate?   How many US military airbases are in Japan?

The point is, Japan is entirely different than Canada and so are its military needs.  Only a buffoon would mask one with the other to blur the gaping differences.   The man is a fool or, worse, a shill.

That he's more shill than fool comes through when Fisher spins this whopper:

"Australia has been so keen to acquire the F-35 that when its order for about 100 of the new aircraft was delayed, Canberra chose to purchase a small number of F-18 Super Hornets, which are largely based on 30-year-old technologies, as a stopgap measure until it can receive its joint strike fighters."

Australia, in fact, is one of the countries most apprehensive about the F-35's abilities, drawbacks and costs.  Here, here and here and that's just for starters.  It opted for the new generation F-18 SuperHornet specifically so that it could defer a decision on the F-35.  The F-18 was how Australia bought breathing room.  It was the Australian military that war gamed the F-35 and found it didn't survive the first engagement of an air war against numerically superior, older and cheaper Russian fighters.
Then Fisher explains why the West needs the F-35 - China.
"Despite its staggering cost, the jets' capabilities have appealed to western governments deeply concerned with how quickly China is acquiring aircraft carriers and expanding its blue water and sub-surface navy to project military power far out into the Pacific Ocean. Beijing is also building a fleet of icebreakers to operate in the Arctic Ocean."
Oopsie, say what?  We're buying the F-35 in contemplation of fighting China?   China is our potential adversary which must, somehow, explain why Stevie Harper says Canada doesn't need the Keystone XL pipeline, we'll just sell all the Athabasca bitumen to our potential enemy, China, instead.

"I am very serious about selling our oil off this continent, selling our energy products off to Asia. I think we have to do that," Harper told broadcaster CTV in a year-end interview.
Isn't this Steve, "we'll stand shoulder to shoulder with our allies" Harper?  Suddenly he's threatening his best ally, the US, with filling the fuel tanks of Chinese warships and jet fighters?   Steve wants to ensure that China is awash in the one thing without which it can't go to war with all those countries lining up anxiously to get their hands on F-35s to fight it?  Oh Canada.
Posted by The Mound of Sound at 7:24 AM

I still think that Dief. was a moron , when our Avro Arrow was cancelled, chopped up, that was the end of Canada's be able to make their own aicraft, and Harper is not one to start again He is making a big mistake..maybe he would like to fly with one engine.

See my comment at the end here at the Canadian Defence & Foreign Affairs Institute's "3Ds Blog":

"Matthew Fisher - Canada locked on to F-35 jet, no matter the cost: analysis"

Many more posts actually by me on the F-35 here.

Awww! That's the Harper "Great Idea". This is the way Canada will become the most powerful country in the world.