Dear North Korea. Sorry For Your Loss. Maybe We Can Help. 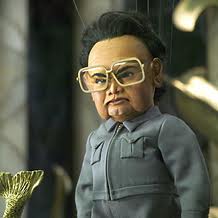 Our sincere condolences on your loss.  A guy like Kim Jong-Il doesn't come along every day and he'll be hard to replace.  Sure you've got his pork pie kid but he's untested, unproven and, let's face it, a bit of a long shot.  What if he turns out to be a dud?  What then?  Why your whole country could fall apart!

Don't fret.  There is a sure-fire, no-risk solution to your dilemma.   Canada has just the guy to meet your every need.  Say the word and he's yours.

Our guy has six years of on the job training in despotism.  He's got everything you could dream of - in spades.  He's grandiose.  He is secretive and a born manipulator.  He truly understands the power and majesty of fear.  He's a thoroughly nasty shit with a volatile temper but he never shows a trace of that in public.  He's power crazed and yearns to transform any nation in his own image.  He's an ardent believer in absolute, one-man rule.   He won't reform your economy.  In fact he'll be too busy staring at himself in a mirror, arranging his hair that he won't even notice that your economy exists.

Best of all, our guy is, well, pudgy.  Maybe not quite to the scale you're accustomed to but, don't fear, he can pork out in a heartbeat.  And, well, perhaps he's a bit on the tall side compared to those he'd replace but we can assure you that, inside, he's really, really small.   And did we mention shallow?

So think about that and get back to us.  But wait, there's more.  Order within the next 48-hours and the shipping's on us.
Posted by The Mound of Sound at 7:04 AM

We can send him over in MacKays yellow and red taxi...

And there's even more! Order before the end of the year, and we will ship him gift wrapped at no additional cost!

Act now while supplies last. May not be exactly as pictured. No refunds.

Anyong say.....Yah know Kim, Jung-il didn't treat his people very well but he sure loved anything American. Also, he had a great sense of humour, was very INTELLIGENT and just as charismatic as Trudeau. When people from the West met him, they liked him including Madeleine Albright. His son is reported to be a lot like him. But you wouldn't know that reading everything written by Americans about Kim, Jung-il or Kim, Jung-un To get an inkling of anything Asian, a person has to spend time there...a lot of time. Kim & Kim was and is not to be trusted just from their advisors alone however MOS and Anonymous, your extreme aversion and hostility toward Kim speaks of having lived under his regime. Have you? Or, perhaps your hate is expressed because you are able to do so due to the circumstance and can get away with it. MOS..your use of words are offensive.

I wasn't aware you had spent much time in North Korea, Anyong. I had the impression you had spent a few years safely on the southern side of the DMZ in profoundly Western South Korea. If anything I suspect you've spent as much time in the North as I have. Kim's abuses of his people are well documented. That you rally to his defence makes me wonder what you could possibly have to complain of in our current leader? Regardless, your indignation is noted.

Your comments, Anyong, have led me to dwell on other historical monsters. Accounts depict many of them as highly talented or gifted, intelligent and very charismatic. That said many of them were even more diabolical. Kim is certainly among their ranks.

Threatening your immediate neighbour with nuclear annihilation is diabolical. Starving your own people is monstrous. Condemning dissenters to torture, imprisonment and death speaks for itself.

That you once lived hundreds of miles distant from this vermin doesn't make him less of a vermin. Jim Jones was certainly charismatic, Hitler was very kind to dogs and John Wilkes Boothe was a highly talented actor. So what?

MoS, your real genius as a blogger is your brutal honesty. You back up what you say, and you let the chips fall where they may. I hope Anyong understands that.

BTW, I think the idea of a Green GDP sucks.

You think for one moment Kim, Jung-il...il pronunciation as in ill and not eel...in my estimation was not an awful man that treated his people with disrepect? You missed my point....the words used in discribing him were just plain offensive. A life is a life and we as Canadians should not ever clapp our hands because someone has died if we have any respect for life. And MOS you haven't even been to South Korea unless it was just recently. And you LeDaro....just a parrot.

By the way....I met many expats from North Korea. How many have you met?

Anyong, you can be very crude in you remarks. There is a very little doubt that Kim Jong IL was a heartless dictator. Then this dynasty business starting with his father, then Jong-IL and now his son.

However, I will give you benefit of the doubt that he was a good man. American propaganda could be merciless and they do demonize heads of sates who do not toe their line. E.g. Saddam was source of all the problems in Iraq according to Bush administration. Now that he is long gone then why the situation is a lot worse than when Saddam was in power. Same goes for Gaddafi. But ultimately the point is that dictatorship is not a desirable form of government.

Finally I never parrot anyone. That was an unprovoked attack.

Where did I say Kim, Jung-il was a good man? Telling it like it is is not ever crude.

My reference to crudeness and rudeness was to the above comment. It was unprovoked.

In that case you ought to have allowed MOS to answer for himself.

MOS...just to correct an oversight on my part and an assumption on yours, I have spent 13 years in South Korea and several in China and about to return to South Korea for one more year.