Is This How Trump Rigged the Election, Really? 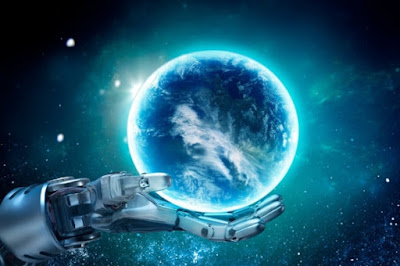 “It’s no exaggeration to say that minds can be changed. Behaviour can be predicted and controlled. I find it incredibly scary. I really do. Because nobody has really followed through on the possible consequences of all this. People don’t know it’s happening to them. Their attitudes are being changed behind their backs.”


Algorhythms. That might have been enough to tip the November elections to the most unlikely presidential candidate, Donald Trump. The Leave camp is convinced that was the decisive factor in winning the Brexit referendum. It's powerful. It's scary. It may be insurmountable.

I did a post on Sunday, "The Big Chill," on an Observer article about how American computer whiz billionaire and Trump backer, Robert Mercer, was behind an outfit, Cambridge Analytica, that data mined Americans' Facebook accounts to target them for political messaging.

In today's Globe and Mail, a report on a Victoria, B.C. company, AggregateIQ that did something quite similar to help swing the Brexit vote for the Leave campaign.

"Without a doubt, the Vote Leave campaign owes a great deal of its success to the work of AggregateIQ. We couldn't have done it without them," Vote Leave's campaign director Dominic Cummings said in a glowing endorsement posted on the company's website.

[AggregateIQ's Zack Massingham said the] main tools are online messaging through social media outlets like Facebook, Twitter and YouTube. He prefers them to traditional media, such as broadcast or print, because the impact is easily measurable. "The tremendous opportunity you have with digital is that you are able to measure everything that much faster, even almost instantly. Print, it's just you fire it off into the ether and whoever ends up at your website ends up at your website. There's not attribution."

The digital revolution is in full swing. How will it change our world? The amount of data we produce doubles every year. In other words: in 2016 we produced as much data as in the entire history of humankind through 2015. Every minute we produce hundreds of thousands of Google searches and Facebook posts. These contain information that reveals how we think and feel. Soon, the things around us, possibly even our clothing, also will be connected with the Internet. It is estimated that in 10 years’ time there will be 150 billion networked measuring sensors, 20 times more than people on Earth. Then, the amount of data will double every 12 hours. Many companies are already trying to turn this Big Data into Big Money.
...

One thing is clear: the way in which we organize the economy and society will change fundamentally. We are experiencing the largest transformation since the end of the Second World War; after the automation of production and the creation of self-driving cars the automation of society is next. With this, society is at a crossroads, which promises great opportunities, but also considerable risks. If we take the wrong decisions it could threaten our greatest historical achievements.

Some software platforms are moving towards “persuasive computing.” In the future, using sophisticated manipulation technologies, these platforms will be able to steer us through entire courses of action, be it for the execution of complex work processes or to generate free content for Internet platforms, from which corporations earn billions. The trend goes from programming computers to programming people.

These technologies are also becoming increasingly popular in the world of politics. Under the label of “nudging,” and on massive scale, governments are trying to steer citizens towards healthier or more environmentally friendly behaviour by means of a "nudge"—a modern form of paternalism. The new, caring government is not only interested in what we do, but also wants to make sure that we do the things that it considers to be right. The magic phrase is "big nudging", which is the combination of big data with nudging. To many, this appears to be a sort of digital scepter that allows one to govern the masses efficiently, without having to involve citizens in democratic processes.

In a complex system, such as society, an improvement in one area almost inevitably leads to deterioration in another. Thus, large-scale interventions can sometimes prove to be massive mistakes.

Regardless of this, criminals, terrorists and extremists will try and manage to take control of the digital magic wand sooner or later—perhaps even without us noticing. Almost all companies and institutions have already been hacked, even the Pentagon, the White House, and the NSA.

A further problem arises when adequate transparency and democratic control are lacking: the erosion of the system from the inside. Search algorithms and recommendation systems can be influenced. Companies can bid on certain combinations of words to gain more favourable results. Governments are probably able to influence the outcomes too. During elections, they might nudge undecided voters towards supporting them—a manipulation that would be hard to detect. Therefore, whoever controls this technology can win elections—by nudging themselves to power.

Look, we've been warned. We have two fiascos, the Brexit referendum and the 2016 presidential election, as compelling evidence of widescale, mass electoral manipulation. It works. It will be used again. The popular will can be subverted, "nudged," for enough money. We, you and me, can be powerfully manipulated and the millions who couldn't care less will be.

We have to respond to this or succumb to it. Scientific American is right to question whether democracy can survive this.

Do we really want a future as digital North Koreans?

This is one of the reasons I do not like the concept of direct democracy, voters voting on issues rather than for representatives. It can turn voting into shopping where the best marketing campaign wins.

Colour me frightened. I'm glad I'm approaching my 'best before' date.
I hope for the sake of my grandchildren you guys figure it out soon.

John, what is with this "you guys"? I'm pretty sure I'm close to your age.

Trump won because the neoliberal Dems pushed the worst candidate they had.

Anon 2 - that certainly was a factor but, even then, she won the popular vote. If you look at the demographics of the election you can probably guess the sector of the public these digital techniques targeted.

No, John. I can't afford that new stuff. All that leaves is Mk. 1 intuition and wild ass guesses.

Anon 2. I'm forever astonished when Trump supporters claim he's not neoliberal. I suspect it comes down to a deeply flawed grasp of the concept of neoliberalism. I'm pretty sure most of you repeat some talking point but don't have a clue.

One of the cardinal tenets of neoliberalism is privatization achieved largely through deregulation. Trump's focus is certainly on deregulation and the 2-for-1 policy is based on what? Ideology, plain and simple.

Yes Trump axed the TPP. He's still in favour of free trade on bilateral agreements. The TPP was multi-lateral but it was as much geopolitical as it ever was economic. With the collapse of TPP the Chinese were ready with their own regional trade deal. America's TPP expressly excluded China just as America is the odd man out of China's regional trade pact. Trump handed that to Beijing on a platter.

Look at Trump's inner circle, his cabinet, and tell me in what way that's anything but neoliberal. It began with political capture, America's "bought and paid for" Congress, ALEC, the oligarchs (Koch, Coors, Adelman), all of them Republican-centric. Yet you ignore facts and reality and tag Democrats with that neoliberalism. You stand reality on its head.

Then you have regulatory capture where senior representatives of regulated industries are appointed to the boards and tribunals that regulate their own industries. Harper did this with our pipeline-friendly National Energy Board.

Trump has taken the third step, delivering hands on control of the White House and its major departments to billionaires, Goldman Sachs alumni, CEOs such as Tillerson. And your mind is so clouded that you think that's not neoliberal?

I think you all very badly need to do a little reading. Educate yourselves on neoliberalism for what it is and also how it contrasts with other systems of political and economic organization. Maybe, just maybe, if you overcame some of that stubborn ignorance you wouldn't have to sound so damned stupid.

I don't disagree Mound that Trump and Klan will be neoliberals as well. He's already indicated that the 'infrastructure' spending will go to private corps.

My contention is that for 50% of Americans they decided to vote for 'none of the above' because they couldn't see a difference.

If Sanders had gotten the exposure of Trump or Hillary, in the latter before the DNC vote, he would now be President and we would be looking at a different country and world....