It's Not Easy Being a Liberal (or a Tory). It Shouldn't Be. 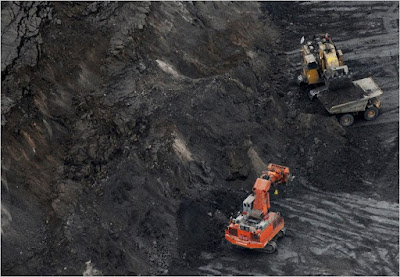 Three facts that reflect what it's like to support the Trudeau government.

Canadians are now one of the world's largest extractors of climate pollution, per capita


We're planning one of world's biggest increases through 2030

Trudeau talks about "phasing out" bitumen production, sort of turning off the tap. That sounds very green. Then again he says this even as his hand is opening that tap just as fast as he can. There's really no polite way to say this. He's a liar and he's lying about the very thing that's now imperilling human civilization, that's beginning to exact an ever increasing toll of lives in other corners of the planet.

Barry Saxifrage has a terrific essay in the National Observer that puts the hard truth into perspective and asks the questions we're ducking. He's even provided a couple of charts that present a stark picture of where we're actually heading.

The first chart reveals that Canada's fossil energy extraction represents 32 tonnes of CO2 per capita. That number is kind of meaningless until you compare Canada's performance against other leading economies. Then it becomes an eye opener. 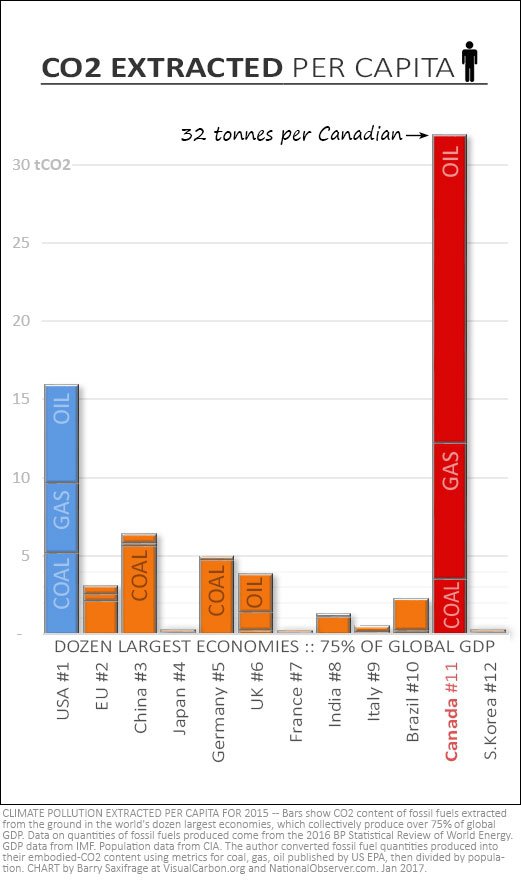 The second chart shows how we stack up against the Americans now and into the near future. 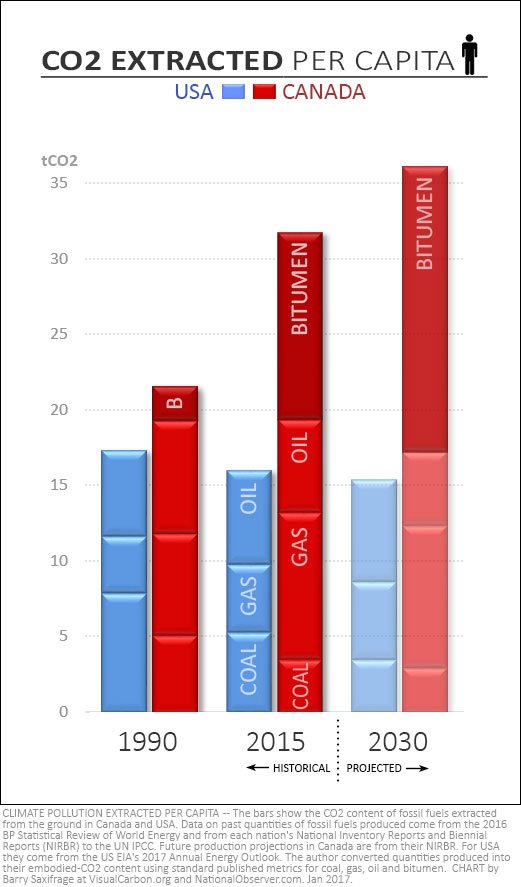 Something to note here.  Even as America's extractive numbers, per capita, decline moderately to 2030, so too do Canada's - except for bitumen production. It's bitumen, good old Alberta Tar Sands crud, that drives our numbers ever upward. Is that what Trudeau means by "phasing out"? Has he succumbed to Trump Syndrome where fantasy overrides reality?

"Over the next twenty years, the industry is set to expand oil production by more in Canada than in any other country. If it continues on this course, Canada could become one of the world’s largest extractors of the new carbon that would drive the atmosphere over the edge."

The numbers show that when it comes to pulling climate pollution out of the ground, Canadians are already among the most extreme in the world. And our future plans are shown to be equally extreme. Unfortunately, such supersized carbon levels also come with supersized risks to our climate and our economy.

The OCI's report did the carbon budget math and concludes starkly:
"Canadian government simply cannot have it both ways. There is no scenario in which tar sands production increases and the world achieves the Paris goals."

The report "Extracted Carbon" from the Canadian Centre for Policy Alternatives (CCPA) comes to the same conclusion. It shows that Canadian plans vastly exceed our largest plausible slice of the world's remaining safe carbon-extraction budget. By refusing to live within our share of a safe carbon-extraction budget it says we are pushing global climate safety out of reach.

In addition, the CCPA report says that that we are holding back needed climate action in another way. Our surging levels of extracted carbon are helping to create a global oversupply. This in turn is pushing fossil carbon prices lower. Falling prices for climate-polluting fuels undercut the economics of transiting to climate-safe alternatives in time. As a result, our expansion plans are "locking in" climate failure by "locking in" long lived carbon infrastructure which will continue pumping out climate pollution long after global climate emissions must go to zero.

Finally, Saxifrage poses the question we all need to put to our elected representatives, starting with the current prime minister.

Some people I talk to about our extreme carbon-dependency say it is just "politically impossible" for our political leaders to transition our economy to one that aligns with a safe climate. My response is: "how do we know? No leader in power has really tried to explain the situation to Canadians and then lead discussions on alternatives. Where are the speeches and reports and commissions? Where is the forum to discuss and evaluate alternatives? Where is the analysis of the risks we face on our current hyper-extraction path?"

Trudeau has told Canadians his government will heed the science. We're going to have a government that operates on knowledge, facts, not belief, faith like the last bunch. So where's this vaunted science on bitumen expansion and on pipelines? I think that might have to go into the "even more bullshit" file.

Jesus will soon land at Calgary International Airport (YYC) with blueprints given to him by God of a design of a global air conditioner which runs directly from unprocessed bitumen. Problem solved.

To add to the problems you post about, Mound, we have a transportation system that favours cars, trucks and airplanes, the most inefficient means of getting people and product around. Airplanes are the worst in that they require brute force to stay up; everything else can idle or shut off without crashing.

Our governments are still discouraging any serious switch to less harmful alternatives to carbon fuels. Politicians pay lip service but that's pretty much where it ends. When I tell people how much I was quoted to put solar panels on my south facing garage roof there is always disbelief. We keep hearing about how solar panels are getting cheaper but it's not happening where I live.

Anon, do you really think Jesus will open his Return Tour in Calgary? I mean it's possible. He might think the "g" in Calgary is just a typo.


I'd be interested to know, Toby, if solar panel costs in Canada are like our cell phone charges or domestic air fares. Is this just another area where we're getting hosed?

Mound, I tend to agree that we are getting hosed in Canada. There was (probably still is) a duty imposed on Chinese panels by Canada. Costs do vary by location. Ontario pays $0.80 per kw for power to the grid; BC pays $0.12. (Don't quote my numbers which are subject to change.)

The biggest factor in Canada may be the massive subsidies, direct and indirect, that all levels of government give to carbon industries. If they were removed, alternate energies would be instantly more realistic.

As you can see in the following link, Canadians have some of the cheapest electricity in the world.

Unfortunately, Owen, you're in a decided minority. I think the majority of our fellow citizens are just fine with it if they think of it at all.

Toby, thanks for the link. The article was very helpful. When I looked at solar power I was told, "why bother. your electricity doesn't come from fossil energy anyway." That does overlook the other drawbacks to hydro-electricity but...

Canadian governments admit to fossil energy subsidies in the $3-4 billion a year range. The IMF, working on direct and indirect subsidies, including costs uncollected, sees the actual number somewhere between the mid-30s to 40 billion.

Trudeau promised to end fossil subsidies but some of the remarks made in recent months, especially from Alberta, suggest that might be another promise that goes by the wayside.

Things are never straight forward. If it was reasonable for use to adopt alternative energies in BC we would not need the Site C dam.

Back to the subject of your essay, I am most disappointed in our Environment Minister who stopped caring about global warming the day she was appointed to defend it. It is her job and she should be hammering the point home on a daily basis. Instead she seems to be building a resume.

Trudeau changes his rhetoric depending upon who is in the room or who he wants to impress.


You would be better posing your question to someone a) who is a Liberal and b) decidedly closer to Ottawa than Vancouver Island. Most give the title to Gerald Butts, senior political adviser and principal secretary to the prime minister. His educational background is in English Literature (BA/MA). Oddly enough, given Trudeau's bitumen boosterism, Butts headed the World Wildlife Fund Canada for four years.

If you want a giggle, watch this: https://youtu.be/zrdSCKDR5-Y

As for Dame Cathy, she's a dead loss.

Is there a pill in Ottawa that erases previous commitment when elected? We give you a job and you forget all that other stuff?

Governments of all stripes typically sell the expansion of tar sands production as job creation. But the good jobs that once existed in Alberta likely aren't coming back. They're not coming back for the same reason good manufacturing jobs aren't coming back to Ontario - automation. Here's what's already being done in Australia by mining giant Rio Tinto:

Today, driverless trucks climb up the terraced roadways of the mines, navigating speed and distance by way of sensors. They haul the ore to a nearby rail terminal where train locomotives are operated by engineers in Perth, 1,500 kilometers to the south. Even the drills work autonomously. Only the shovel operators and a small crew of maintenance people are needed on site.

Aside from its horrendous environmental footprint, the knock against tar sands crude is that it trades at a low price due to the extra cost of refining it. With automation, oil and gas companies can enhance profitability even with low market prices. But those $100,000-a-year jobs driving haul trucks will be gone, as will many other high-paying jobs in the oil patch.

The public is being conned into believing that we can't raise royalties and that we need to continue building oil infrastructure or those good jobs will be gone. Well, take it from someone who used to work in the Ontario auto industry - automation will kill those good Alberta jobs anyway. Alberta was once a leader in renewable energy. It's time to forget about the tar sands and invest in future jobs in renewable energy.

Anyong...Hello Mound. Have you read about Kimberley, B.C. and its production of Solar Energy and now selling to the grid?