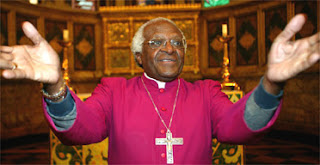 The Great Debate over Global Warming is inevitably focused on how our GHG emissions will impact us and our future generations. Will we be 2 degrees warmer or 3 or perhaps 4? More sunscreen perhaps? Looser clothes? Decisions, decisions.

The enviro gargoyles like Bush and Harpo and Baird look straight ahead, rigid as stone. If they weren't they might have to look behind them and see what we've already done to the Third World and what we have lying in store for them in the future.
Desmond Tutu wrote eloquently of this recently in The Guardian. Here are some portions of his commentary:
"What if dealing with climate change meant more than a flick of a switch? Would our friends in the industrialised world think differently if the effects of climate change were worse than extended summer months and the arrival of exotic species? Cushioned and cosseted, they have had the luxury of closing their minds to the real impact of what is happening in the fragile and precious atmosphere that surrounds the planet we live on. Where climate change has occurred in the industrialised world, the effects have so far been relatively benign. With the exception of events such as Hurricane Katrina in 2005, the inhabitants of North America and Europe have felt just a gentle caress from the winds of change.
"I wonder how much more anxious they might be if they depended on the cycle of mother nature to feed their families. How much greater would their concerns be if they lived in slums and townships, in mud houses, or shelters made of plastic bags? In large parts of sub-Saharan Africa, this is a reality. The poor, the vulnerable and the hungry are exposed to the harsh edge of climate change every day of their lives.
"The melting of the snows on the peak of Kilimanjaro is a warning of the changes taking place in Africa. Across this beautiful but vulnerable continent, people are already feeling the change in the weather. But rain or drought, the result is the same: more hunger and more misery for millions of people living on the margins of global society. Even in places such as Darfur, climate change has played a role. In the semi-arid zones of the world, there is fierce competition for access to grazing lands and watering holes. Where water is scarce and populations are growing, conflict will never be far behind.
"Every child will remember the story of the three little pigs and the big bad wolf. In the world we live in, the bad wolf of climate change has already ransacked the straw house and the house made of sticks, and the inhabitants of both are knocking on the door of the brick house where the people of the developed world live. Our friends there should think about this the next time they reach for the thermostat switch. They should realize that while the problems of the Mozambican farmer might seem far away, it may not be long before their troubles wash up on their shores."
Posted by The Mound of Sound at 7:35 AM