A World in Flux 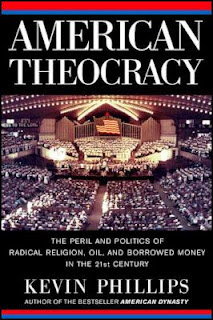 This guys book is plain nuts . . . where is the American Empire???
It doesn't exist!!!
American theocracy??? The Constitution says the state shall sponsor no religion . . . unlike all European countries that had state sponsored churches eg: Germany-Lutheran, Britian-Church of England. The constitution does not say free from religion . . . but freedom of.
It is another lefty whine, by an ill-informed fan of Jimmy Carter.
The US is freest country on the planet, the country everyone loves to hate, but most want to live in . . . the only thing that could bring the US down is the likes of Pelosi and the looney lefties . . . now that's another issue!!!

Oldschool, you should at least read the book before claiming it's "plain nuts." Phillips is a highly respected Republican, not "an ill-informed fan of Jimmy Carter." Your critique is pretty facile.