If George and Tony had fought WWII 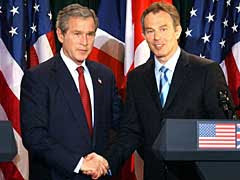 Go back to the dark days when Hitler's armies ravaged Europe and the Rising Sun blazed a path across the Pacific. Imagine, no Roosevelt, no Churchill, their places instead held by George W. Bush and Tony Blair. Imagine the fate of Western democracy in the bumbling fingers of these two "leaders."

Bush's grand adventure in Iraq, his grandiose "war on terror", has run considerably longer than the American involvement in WWII. Unlike FDR's war, GWB's war was one largely of choice ill-conceived, cloaked in lies and incompetently executed.
America, like Britain, began WWII ill-prepared and both nations sustained a series of defeats and setbacks before the tide gradually turned in favour of the Allies. Roosevelt and Churchill didn't exaggerate the threats facing their people but bolstered their courage and calmed their fears.

The War on Terror actually began with stunning victories - the rout of the Taliban and the toppling of Saddam but again the tide turned, this time not in Blair or Bush's favour. Blair and Bush, unlike FDR and WSC, preyed upon their own people - manipulating them with lies and fear and crushing those who might speak truth by impugning their patriotism.

Had we been left to rely on these two incompetents and their sycophants such as Howard and Harper, we'd have been in big trouble indeed.
The Bush/Blair syndrome demonstrates that weak, ideologically-perverted political leadership can undermine, even negate, massive advantages in superior technology and firepower. Once the initial combat is won, all that remains is a void of incompetence in which the bad guys are able to rally, regroup and retake the field in a form that is vastly more difficult to contro and from which there is neither victory nor honour to be claimed.
In war, bad political leadership can be as fatal as bad intelligence, incompetent generals, insufficient troops or defective weapons. This is nothing new. Our history books are full of examples - Hitler, Stalin, Lyndon Johnson, Kaiser Wilhelm and on and on.
It is folly bordering on dereliction for a smaller nation's leadership to cast their country's lot in with that of an incompetent such as George Bush. Canadians should thank their Supreme Being of choice that Stephen Harper wasn't in power in time to commit our soldiers to the quagmire that continues to flourish in Iraq.
Tony Blair will soon be gone and time is all too slowly running out for George Bush. However the conflicts and instability they did so much to fuel will continue and new leaders, especially in Washington, will emerge to take their turn as leaders of the free world. All we can hope for is that our nation, by then, has new leadership that can put Canada's interests first in meeting these ongoing challenges.
Posted by The Mound of Sound at 4:32 PM