The Measure of the Man 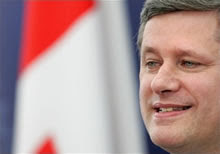 Odd how what goes around comes around. During the previous government, Stephen Harper derided Paul Martin, calling him "Mr. Dithers." Now that Canada appears to be facing the greatest challenge in the history of mankind the real Mr. Dithers is emerging and it's none other than Harpo himself.

Environmental degradation is an immediate, already enormous and steadily worsening threat to our very civilization. To that overstuffed suit, however, it's little more than an election issue. That's obvious from the way that Harpo is dithering about it and dithering he is.

On the Global Warming issue, Harpo is all form over substance. He says he gets it but is careful to avoid saying just what he gets. What does GW mean to this charlatan? Like pretty much everything he says, you would be foolish to judge him by his words.

The latest IPCC report warns that we may have as little as eight years in which to implement measures that could allow us to avoid the worst impacts of global warming. Eight years. That's precious little time. There is no time to waste, no time for dithering, no time for piecemeal measures and heel-dragging.

Harpo clearly isn't troubled by this warning. If he was, his government would be taking steps to ensure that our country was prepared for what is to come. He would be building concensus at all levels on the nature and scope of these problems and the options remaining to us to respond. Without such concensus there will be no significant action. Harper seems content to ensure that there is no such concensus.

Stephen Harper thinks Canada's government needs to be reformed, restructured. Well, here's his opportunity. Of course the type of restructuring nation's need in periods of dangerous challenges isn't quite what Harpo has in mind.

Harper wants a decentralized Canada in which many federal powers are transferred to the provinces. He would be happy to Balkanize our country. Such an arrangement, however, would make it vastly more difficult, if not impossible, to effectively respond to these looming environmental threats.

If anything, federal powers need to be consolidated and strengthened to help Canada meet the challenges of global warming, at home and internationally. Harpo has no intention of doing that.

It's clear that we must move away from our carbon-based economy. Harper plainly rejects that notion, clinging to his vision of Canada as an "energy superpower" rising to global prominence thanks to the tar sands, our country's top GHG emitter.

Harper is supposed to serve Canada, not Alberta. He is supposed to serve the Canadian people, not Big Oil.
There's a void in Canada's leadership and it is Stephen Harper. At this critical moment we are led by the real Mr. Dithers, a man so wedded to his ideology that he is incapable of discharging his responsibilities to the country and to all of us. Stephen Harper's vision is from a different time and has been overtaken by events that have rendered it irrelevant. Like all ideologues he came to office with an A game and that's all.
Eight years. If that assessment is right, we haven't got a moment to lose in getting rid of this government.
Posted by The Mound of Sound at 10:26 AM