All Quiet in Kandahar? 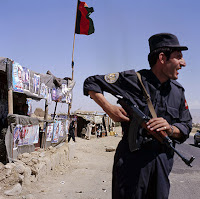 Reports in The Globe and The Star this week quoted Canadian officers in Kandahar claiming that they had the Taliban on the run. The stories said that Canadian forces had more or less pacified Kandahar province although they were taken by surprise that the Taliban reverted to guerrilla tactics. Be that as it may, Kandahar was a real success story. Really?
Not according to a report in today's NatPo. It reveals that the lions' share of the battle against the Taliban in Kandahar isn't being fought by the Canadian forces or even the Afghan National Army. It's being fought, daily, and often on losing terms by the Afghan Police. All quiet in Kandahar? Hardly.
"The commander of a beleaguered Afghan National Police detachment in Kandahar province's Zhari district is becoming increasingly frustrated with the Canadian Forces in the area. The foreign soldiers, he charges, have repeatedly ignored police calls for help in fighting the insurgents and overlooked tips on where to find and destroy Taliban nests.
"In fact, Mr. Hakim contends, a lack of co-operation between the police, the Afghan National Army and Canadian troops has helped insurgent strength in the district grow to 300 or 400 fighters from 100 six months ago.
"...the police and NATO seem to be waging their own, independent wars, the commander said. The Canadian offensives against the Taliban, like Operation Hoover a few weeks ago, are largely "useless," because the militants hear in advance of the large-scale missions that often involve tanks. They hide to avoid confrontation and sometimes lay down improvised explosive devices to sabotage the Canadian advance, the officer observed.
Regardless, one thing is clear. The under-equipped, out-gunned Afghan National Police are bearing the brunt of the fighting in Zhari.
"The police are in really bad, bad conditions down there," said Col. Mohammed Hussain, the national force's liaison officer at the Canadian-run provincial reconstruction team. "They are fighting 24 hours, every hour, every minute, every second of the day."
"Experts say that policemen like Mr. Hakim are taking a beating everywhere in southern Afghanistan. With just 10 days of training and equipped with a minimum of firepower, they are used as a military force, a sort of "canary in the coal mine" or tripwire to flush out the Taliban, said Supt. Dave Fudge, the RCMP officer who runs a police training program for the provincial reconstruction team.
"So, for every Afghan army soldier killed, 27 police officers lose their lives to insurgent attacks."
Posted by The Mound of Sound at 10:40 AM