Bernier Get Your Mop - Clean-Up In Aisle Six 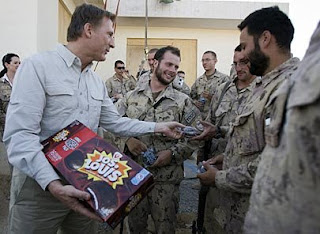 The Canadian Armed Forces new policy of suppressing bad news out of Afghanistan seems to have reached even the inner sanctum of Stevie Harper's cabinet. That was pretty clear today when our supposed foreign affairs minister, Maxime Bernier, told reporters in Kandahar that attacks against Canadian soldiers there had decreased over the past year.

"The territory is more secure now today, here in Kandahar than it was a year ago," Mr. Bernier said. "Look just a year ago what happened, there were many attacks, and the attacks have diminished."

A United Nations report, one that Bernier apparently couldn't read, states that insurgents attacks have increased 25% over the past year, noting that may be a conservative assessment. Obviously it's not conservative enough for Bernier. The UN report is backed up by like assessments from other respected agencies.

Could it be that Bernier has caught Bush/Cheney disease - the virus that makes you spout whatever crap comes off the top of your head without regard for reality?

According to the Globe & Mail, our befuddled foreign affairs min pointed out other fantasy improvements:

"He also claimed that it's getting easier for aid workers to travel the province.
"We have improvement because our civilians, our humanitarian workers are able to go out there and do their work," Mr. Bernier said.

"In fact, the growing risk of kidnapping among aid workers has prompted the UN to develop a new map assessing the likelihood of capture by insurgents in districts across the country. Almost the entire province of Kandahar is shown as "high abduction risk."

"In a survey this year, Afghan government employees said they have limited ability to visit the majority of Kandahar's districts without armed escort; across the south, local officials said their access was decreasing because of the rising insecurity.

"Another measure of aid workers' ability to work is the UN's internal security map.

"This summer the map showed about one-third Afghanistan in the highest-risk category for travel, representing a deterioration from the summer of 2006, when only 15 per cent of the country earned the same rating."

And we're paying this clown for what exactly? He must've been too busy raiding the mini-bar on the flight over to Kandahar to bother getting even a basic briefing from his staff. Maybe Bernier should start looking for a job he can handle - something with a handle.
Posted by The Mound of Sound at 6:37 AM