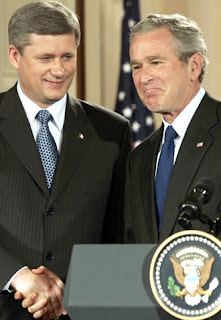 The past few decades have witnessed the growth of a political disease that, like all untreated contagions, led to an epidemic in the United States over the past six years. It's a malignancy often called the "far right."
It's debilitating to those who succumb to it. It disrupts their sensory systems and causes cognitive dysfunction. They see only in black and white and hear only that which pleases them. They quickly become incapable of discerning nuance of any form, of grasping facts and other realities and, in advanced states, become myopic to the point of blindness - seeing nothing more than a burning light that they unquestioningly follow.
The far right malignancy has savaged the United States, sapped its strength, and left it incapable of standing upright. Unable to recognize its true foes it has to be content to swing blindly, treating everyone as a threat.
There are those in our own country who show the incipient signs of infection. One of them currently resides at our expense at 24 Sussex Drive. Fortunately for us, his disease has been slow to spread to our fellow countrymen thereby keeping his own affliction in check, at least for the moment.
There is reason for hope. Today I found it in the musings of right-wing columnist David Brooks. After years of cheerleading, then justifying, then excusing the diseased excesses of his own party - yes, that would be the Bush Republicans - Brooks has seen the light, thrown in the towel, opted for the cure. He has retreated to take refuge in the wisdom of Edmund Burke:
"Modern conservatism begins with Edmund Burke. What Burke articulated was not an ideology or a creed, but a disposition, a reverence for tradition, a suspicion of radical change.
Over the years, the voice of Burke has been submerged beneath the clamoring creeds. In fact, over the past few decades the conservative ideologies have been magnified, while the temperamental conservatism of Burke has been abandoned.
Over the past six years, the Republican Party has championed the spread of democracy in the Middle East. But the temperamental conservative is suspicious of rapid reform, believing that efforts to quickly transform anything will have, as Burke wrote “pleasing commencements” but “lamentable conclusions.”
The world is too complex, the Burkean conservative believes, for rapid reform. Existing arrangements contain latent functions that can be neither seen nor replaced by the reformer. The temperamental conservative prizes epistemological modesty, the awareness of the limitations on what we do and can know, what we can and cannot plan.
Over the past six years, the Bush administration has operated on the assumption that if you change the political institutions in Iraq, the society will follow. But the Burkean conservative believes that society is an organism; that custom, tradition and habit are the prime movers of that organism; and that successful government institutions grow gradually from each nation’s unique network of moral and social restraints.
Over the past four decades, free market conservatives within the Republican Party have put freedom at the center of their political philosophy. But the dispositional conservative puts legitimate authority at the center. So while recent conservative ideology sees government as a threat to freedom, the temperamental conservative believes government is like fire — useful when used legitimately, but dangerous when not.
Over the past few decades, the Republican Party has championed a series of reforms designed to devolve power to the individual, through tax cuts, private pensions and medical accounts. The temperamental conservative does not see a nation composed of individuals who should be given maximum liberty to make choices. Instead, the individual is a part of a social organism and thrives only within the attachments to family, community and nation that precede choice.
Therefore, the temperamental conservative values social cohesion alongside individual freedom and worries that too much individualism, too much segmentation, too much tension between races and groups will tear the underlying unity on which all else depends. Without unity, the police are regarded as alien powers, the country will fracture under the strain of war and the economy will be undermined by lack of social trust."
My God, Brooks speaking like a true Liberal. Maybe, just maybe, he could bring a bit of that vaccine to that clown in that lovely house on the Rideau.
Posted by The Mound of Sound at 9:05 AM

Extreme right wing, and extreme left wing, both have the exact same idea of less individualism, fewer rights, fewer personal decisions. Im curious as to which one we get to close to, my bet is on the left at first, followed by a drastic switch to the right after something drastic occurs. Afterall it's human nature.

There definitely are similarities between extreme left and right in that both of them lead to totalitarianism grounded in rigid ideology.

Even in healthy democracies the traces of state domination can arise in times of dire emergency such as a world war. The motives, causes and objectives obviously differ.

The past seven years have shown that fascism can take hold even in modern, affluent and somewhat progressive societies when a people eagerly believe what, to an objective observer, are patent lies.

Pierre Burton once said that one big difference between Americans and Canadians is that Americans need to believe whereas Canadians cling to a form of cynicism.

It is remarkable how Americans are brought up to embrace their nation, their constitution and even their president with a profound reverence and this bizarre and ultimately toxic notion of American exceptionalism. Both were devices that suited a rapidly ascending state but will cause difficult adjustment issues as America loses its domination and begins a shallow decline in the face of the ascendant BRIC nations.

The current administration and its neo-con gurus recognize what's coming and that's obvious when you explore the Bush Doctrine, as xenephobic,imperialistic and fascist a coda as you can find in the past half century at least.

I wouldn't have a pegged you as an admirer of Burke. Burke was skeptical of any attempt to rationally design society or culture. This would include a strong aversion to big-government social democracy.

But regardless of where one stands, it would be nice to see Conservatives in the States return to their Burkean roots instead of this revolutionary exceptionalism that blindly believes the US can shape the world for the better. In this way, the neocons and liberal imperialists (i.e., out of Iraq, into Darfur) have more in common with Marxists and progressives than with conservatives.

Ah, Cam. That you've attempted to peg me at all is unfortunate and to decide I am an admirer of Burke even worse. I find much fault in Burke but would infinitely prefer to deal with Burkean conservatives than the slime that wear the "C" mantle today. Liberal imperialists? In order to sustain your arguments you need to grasp nuance. There is a world of difference between imperial conquest and humanitarian intervention. I could write a page of points distinguishing Iraq from Darfur. You should take a few minutes with pen and paper and try it yourself. That would really hone your political vision or at least remove some of the cataracts.

I can think of a lot more similarities than differences.

Both the Iraq debacle and potential intervention in Darfur are perceived by many as Western imperialism. Just picture NATO troops landing in yet another Muslim nation (Sudan's got a lot of oil too).

Both imply a belief that far removed governments, not the most efficient and bright enterprises in the first place, would be able to calculate and adjust to the unintended consequences that come along with adventurism in a place they aren't familiar with.

Historically, humanitarian intervention and Western exceptionalism have gone hand in hand. The belief in the superiority of Western policial systems (I'd agree on that) easily leads to the belief that it is our duty to spread it and rescue others from tyranny. A noble cause perhaps, but not so easy to convince others of its legitimacy.