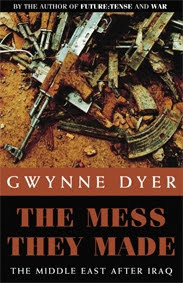 I've been meaning to write a post about Gwynne Dyer's new book, The Mess They Made, but I think it's too full of gems to pass it off with a review. If you're at all concerned about the Middle East, radical Islam, the United States, or Canada living in the shadow of America, you really should read this book. To try to get you hooked, I'll be doing a few posts based on excerpts from the book.
In this part I'll deal with one of Dyer's conclusions as to why the US won't leave Iraq:
...the U.S. authorities in Iraq expend a great deal of energy in ensuring that an official request for the withdrawal of foreign troops does not see the light of day. The only logical explanation is that, while the Bush administration would love to bring most of the troops home and ease the political pressure there, it still has not accepted the necessity of bringing them all home. It still imagines, in some incoherent way, that it can manipulate events in Iraq so that the insurgency dies down, the economy stabilizes, and a grateful Iraqi government welcomes the permanent stationing of twenty or thirty thousand American troops on its territory. The fourteen "enduring bases," with which the White House planned to replace the bases in Saudi Arabia that have become a political liability for the Saudi government, are still under construction, and as far as the White House and the Pentagon are concerned the game is still afoot. Chickens do tend to run around for a bit even after their heads are chopped off.

...in order to avoid demands for withdrawal the Iraqi government must be kept weak. Prime Minister al-Maliki has publicly said that he cannot move even a company of soldiers without U.S. permission. It is the CIA that pays the entire budget of the main Iraqi intelligence service, not the Iraqi government, so guess who it works for. ...al-Maliki's government, unable to raise anything like the amount of revenue it needs from the devastated Iraqi economy, is on a very short financial leash held by the Americans.
Posted by The Mound of Sound at 7:49 AM

This book is in a stack of "yet to get to's". I'm looking forward to it.

Rather shocking how little the Americans likely know about what really is going on isn't it? I suppose the same could be said here though.

Hi KNB. It's definitely a "must read." The book stands alone quite well but does benefit from the context in Dyer's previous three works, "Ignorant Armies", "With Every Mistake" and "Future Tense."

Dyer is certainly not infallible but he does bring to his writing a deep foundation of historical knowledge coupled with solid, dispassionate analysis. Too many of his contemporaries simply merge ideological bent with selective facts to shape their analyses - but that never works very well.

Maybe it's not reasonable to expect the top nation in a unipolar world to act rationally. Such a nation literally defines what is excessive and quite often through trial and error adventures that, by virtue of its enormity, become globally seismic.

Dyer points out in his latest book that Bush has triggered fundamental and irreversible change in both the Middle East and the United States. Neither will be what it was before his first inauguration and the transformation Bush has triggered has only begun. From Europe to the Middle East, Asia to Africa, America is in the process of gradually losing its hold as rivals emerge and its own power declines.

These are indeed fascinating times in which we live. We could be in for a breathtaking ride.