Reality is Bad for Business 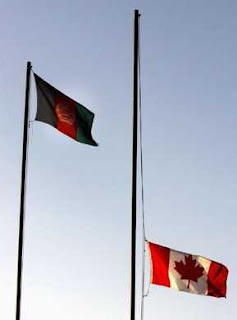 There was a telling little article from David Common on CBC's web site today. Apparently Canada's Defence Department would rather not bother you with any information about casualties suffered by our forces in Afghanistan:
...a great many Canadian soldiers are being injured in Afghanistan. And we’re not hearing about it.
The question now is, why? Two years ago, at the outset of this more dangerous mission in southern Afghanistan, any and every injury was made public to journalists embedded with Canadian soldiers in Kandahar, and with Canadians at large.
A new policy has clearly emerged. Deaths are still reported but injuries are not, unless one of two scenarios exists. The first is if the injury is so severe, it may very well result in death. The second is if journalists already know about it. If a journalist happens to be in a convoy that is hit and sees the injury, they’ll obviously know about it.
Injuries are increasingly frequent these days. As many as four roadside bomb strikes happen each week. Soldiers are being injured in the process, some of them seriously. Some of them will lose limbs. Others will have their lives irreparably damaged. We won’t know. Whether we should know is another question.
The point is this: soldiers have died in this place, but many more have been injured. The United States, which is engaged in its own largely unpopular war in Iraq, still releases injury statistics. Canada does not.
Making Canadian casualties disappear from public view is unacceptable.
Posted by The Mound of Sound at 10:26 PM

Canada has a history of self-regulated federal departments; RCMP, DND being two of the more prominent.
The tradition within has established it is their command who decides what should be known and what remains secret. Tradition alone has it that "they" know what's best for the country.
No matter the national interest, parliamentary privilege, Charters, Prime Ministers and MPs, federal acts and the law, these are matters of privilege and Lord knows, they still consider themselves above it all.