First the Good News, Then the Bad News on Global Warming 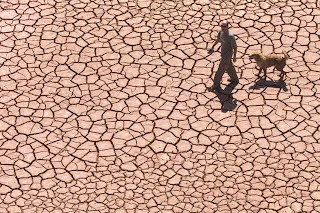 First? I lied, there is no good news. There is, however, bad news aplenty.

In today's Guardian there's a warning from James Hansen, head of the Nasa Goddard Institute for Space Studies in New York. Hansen has popped up to admit they got it all wrong on global warming. It seems they underestimated the scale of the problem:

"Hansen says the EU target of 550 parts per million of C02 - the most stringent in the world - should be slashed to 350ppm. He argues the cut is needed if "humanity wishes to preserve a planet similar to that on which civilisation developed". A final version of the paper Hansen co-authored with eight other climate scientists, is posted today on the Archive website. Instead of using theoretical models to estimate the sensitivity of the climate, his team turned to evidence from the Earth's history, which they say gives a much more accurate picture.
The team studied core samples taken from the bottom of the ocean, which allow C02 levels to be tracked millions of years ago. They show that when the world began to glaciate at the start of the Ice age about 35m years ago, the concentration of CO2 in the atmosphere stood at about 450ppm.

"If you leave us at 450ppm for long enough it will probably melt all the ice - that's a sea rise of 75 metres. What we have found is that the target we have all been aiming for is a disaster - a guaranteed disaster," Hansen told the Guardian."

Okay, bring on the global cooling wingnuts. You can't pass up this opportunity to puke out your standard drivel. As for the rest of us, crunch time is just about on us.
Posted by The Mound of Sound at 7:55 AM