Four Out of Five Americans Agree 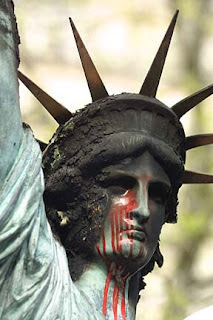 ...that the United States has come off the rails. A New York Times/CBS News poll has found that 81% of Americans believe that “things have pretty seriously gotten off on the wrong track.”

Only one in five believes the US economy is in good shape. Two thirds believe their country is already in a recession.

An interesting point is the resurgence of populism. Those interviewed were willing to support government assistance for beleaguered borrowers (53-41%) but opposed bailouts for lenders, even if that would deepen the recession.

For the first time in the two decade history of this poll, less than half of respondent parents, 46%, expect their children to enjoy a better standard of living than themselves.

These sound like the conditions that could begin to shake the American people out of their democratic torpor. Wouldn't that place look different if the American people demanded that their leaders served the people instead of the lobbyists?
Posted by The Mound of Sound at 11:37 AM