It Doesn't Add Up 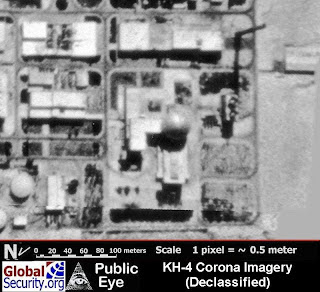 If we've learned one thing from that gang of right-wing mongrels in the White House, it's that we ought to take their claims with a truckload of salt. How can I put this respectfully? Oh yeah, they're a pack of manipulative frauds and liars (no wonder Harper adores them so).

So where is the healthy skepticism toward the latest White House claim that Syria, aided by North Korea, was building a nuclear reactor for the production of weapons of mass destruction until it was - blessedly - destroyed by the Israeli Air Force last year? The western media are swallowing this one quite happily, like trusting little children. No one is stepping back from this narrative, taking a careful look and asking just why it doesn't add up?

It doesn't add up.

The story is that Syria, with North Korean collusion, was constructing a secret weapons reactor in the middle of the desert. There's your first clue that this doesn't add up. A "secret" reactor in the midst of a "desert"?

How does any nation do anything secretly in a desert? If there's one place you can't hide anything of any size it's a desert. Now, unless the Syrians are complete morons they would know that their region is under constant satellite surveillance. They would have to know their every move would be observed, tracked and analyzed.

A nuclear reactor requires a lot of infrastructure - massive amounts of electricity, water, etc. Those aren't the sorts of things you'll readily find in the middle of a barren desert. That means you would have to build roads and power lines and water lines that would stand out in a desert and would lead the observer to ask, "hey, what are these for?" You can also follow them right to this big structure in the middle of the desert and say "hey, what is this?"

With satellite imagery capable of reading licence plates from space, concealing anything - any equipment, any structure, any activity - at a place of interest is extremely difficult even if it's not in the middle of a barren desert. In a desert, however, that goes from "extremely difficult" to "damned nigh impossible."

Another wee problem with building such an obvious target in the middle of the desert is that it makes targeting it a snap. There are no box canyons, no sheltering mountain slopes, just wide open spaces that allow an attacker to come from anywhere and make the target easy to locate and attack and difficult, if not impossible, to defend.

Okay, so maybe the Syrians are dumb as mules but the North Koreans sure aren't. They know a thing or nine about American satellite imagery and they've had decades to learn how to get around it. They also know that getting caught building a weapons reactor abroad would have enormous consequences for them.

So, take all these things together. You can't disguise what you're building, you can't hide it, you can't defend it, you know you're going to be watched and under constant surveillance and yet, poor as you may be, you're going to build a very expensive weapons reactor in this most unlikely of places knowing full well it's going to be destroyed and there's absolutely nothing you can do to stop that.

And that's the narrative Washington has sold to the western media. Dumb, dumber and dumbest.
Here's something else to dwell on. Just what is Washington up to? Why are Bush/Cheney running this particular scam at this particular time? These things do happen for a reason but the recesses of the mind of Dick Cheney are a damned dark place to go looking for one.
p.s. The pic above is Israel's Dimona weapons reactor.
Posted by The Mound of Sound at 7:14 AM

What was shown on TV was mostly computer animation. May be they are sending a message to Iran that 'we took out nuclear facility in Syria and we can do the same in Iran'.

I know how Syrians transported water - on the back of camels ;)

isnt that the same pictures we saw before the illegal iraq invasion????