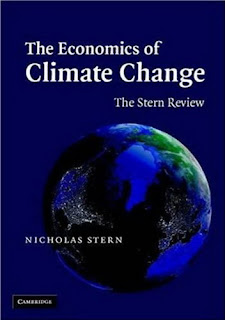 About 18-months ago, Nicholas Stern came to public attention for his study of the economic costs of tackling global warming now or later.

The former World Bank chief economist was recruited into the British government by then Chancellor of the Exchequer, Gordon Brown. In 2005 Stern was tasked with analyzing the economic aspects of global warming. His core conclusion, that the costs of not dealing with the problem effectively now could be 20 times greater than immediate action.

Naturally the key findings of the Stern Report were rebuffed by the denialists as scaremongering.

Today, Baron Nick told Reuters that the latest research shows his findings were, if anything, unduly rosey:

Stern said that increasing commitments from some countries such as the European Union to curb greenhouse gases now needed to be translated into action. Policymakers, businesses and environmental pressure groups frequently cite the Stern Review as a blueprint for urgent climate action.

The report predicted that, on current trends, average global temperatures will rise by 2-3 degrees centigrade in the next 50 years or so and could reduce global consumption per head by up to 20 per cent, with the poorest nations feeling the most pain.

Some academics said he had over-played the costs of potential future damage from global warming at up to twenty times the cost of fighting the problem now, such as by replacing fossil fuels with more costly renewable power.

Stern said today that increasing evidence of the threat from climate change had vindicated his report, published in October 2006.

"People who said I was scaremongering were profoundly wrong," he told the climate change conference organised by industry information provider IHS.

Stern said that to minimise the risks of dangerous climate change global greenhouse gas emissions should halve by mid-century. He said the United States should cut its emissions by up to 90 per cent by then."

Meanwhile, America's Neanderthal-in-Chief, George w. Bush, today came out with his own proposal on fighting global warming. Rather than a 90% cut in emissions by 2050, Bush thinks just halting the growth of greenhouse gases by 2025 would be dandy.
Posted by The Mound of Sound at 4:25 PM

IF President Bush had unveiled his goals for reductions in greenhouse gas emissions at the beginning of his administration instead of in its waning months, he might have actually played a role in linking the United States to global efforts to curb climate change. But the proposals he made yesterday, which in 2001 could have been a starting point for negotiations with advocates of stronger action in Congress, are now too belated and too weak to be more than a historical footnote. All three remaining presidential candidates are committed to much more stringent, mandatory reductions in carbon dioxide.