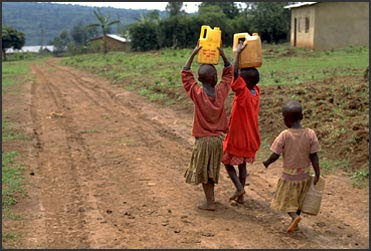 It's a bitch to be poor and thirsty. You see the poorest people on the planet naturally have the least amount of money (that's why they're poor) and yet they have to pay the most for water - and often by a huge margin - compared to rich folks.

Check out this eye-opening analysis piece from the Financial Times:

"Slum-dwellers in Dar es Salaam pay the equivalent of £4 ($8, €5) for 1,000 litres of water, bought over time and by the canister. In the same Tanzanian city, wealthier households connected to the municipal supply receive that amount for just 17p. In the UK, the same volume of tap water costs 81p and in the US it is as low as 34p.

Figures from other countries confirm the evidence: it is generally the poorest who pay most for what is one of the most essential of all natural resources. Water is in short supply for a large proportion of the world’s people: about 1bn lack access to clean water and 2.6bn have no sanitation. An estimated 5,000 children die every day from water-related disease, according to WaterAid, the London-based charity.

One of the most damaging effects of the failure to price water fairly is the global trade in “virtual water” – that is, water used in the production of food or manufactured goods. Some countries that are poor in water nevertheless send it abroad in the form of agricultural and industrial exports.

Australia exports more “virtual water” than any other country, through shipments of wheat and other crops. Its farmers have suffered a seven-year drought, only now showing signs of easing. As a result, they are the most efficient agricultural users of water in the world. Experts wonder, however, whether it makes sense for such an arid country to engage so much in growing irrigation-intensive crops for export.

The trade in “virtual water” goes largely unnoticed by consumers of the processed goods. But the price of many goods sold around the world shows that the water that went into their production was very cheap. A pair of jeans that sells for a few pounds uses up to 11,000 litres of water, according to Waterwise, a UK not-for-profit organisation. A hamburger that sells for less than a dollar requires more than 2,400 litres of water to produce.

Agricultural users of water are often heavily subsidised, whether directly or indirectly, making the water for farmers “vastly underpriced”, says Andrew Hudson, leader of the water governance programme at the UNDP. This is contributing to serious problems: the UN organisation estimates that in parts of India, ground-water tables are falling by more than a metre a year, jeopardising future agricultural production.
Other businesses may also have their water supply subsidised or may be granted extraction rights that give them cheap or even free access to water sources. The UNDP concludes: “When it comes to water management, the world has been indulging in an activity analogous to a reckless and unsustainable credit-financed spending spree. Countries have been using far more water than they have, as defined by the rate of replenishment.” This recklessness is storing up problems for the future, when the world’s population is forecast to rise to 9bn by 2050 from nearly 6.7bn today."

You can find well over 200 posts on this blog concerning water and the looming problems that are facing the world, including Canada. It's a potential, multi-dimensional catastrophe that's tied to global warming, population growth (and migration), global security issues (Darfur for one), droughts, floods, freshwater salination, pollution and depletion (including groundwater exhaustion).

We're all but blind to the enormity of this building problem and the impacts it will bring to everyone on this planet - and that means you too. But, so long as it keeps pouring freely whenever we turn the tap, it's out of sight, out of mind.

We have to stop taking this for granted. If we leave this issue at the bottom of the pile, the day will come when we give ourselves cause to regret that.
Posted by The Mound of Sound at 11:11 AM