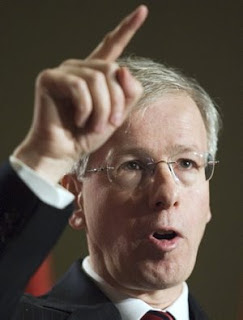 One in ten. It doesn't make much difference what you're trying to achieve, if you're scoring 10% it almost always means you have a problem.

The carbon tax has a problem.

It's not so much a problem with the merits of the idea itself or the political hurdles it poses. Its main problem is the guy who says he'll stake all to make it happen - Stephane Dion.

The latest Toronto Star/Angus Reid poll shows that Dion isn't the guy to sell a carbon tax to the Canadian public.

"Liberal Leader Stéphane Dion's approval rating has sunk to its lowest level yet, with nine of 10 Canadians saying they disapprove or are not sure of his performance as the head of the party, according to the latest Toronto Star/Angus Reid opinion poll.

Not since former Liberal leader John Turner bottomed out with a 14 per cent approval rating shortly after losing the 1988 election have things been so bad for the head of Canada's most successful political party. Just 10 per cent of those surveyed stand behind Dion's leadership, the poll shows, compared to 32 per cent for Prime Minister Stephen Harper.

What's worse is that the number of people who said they were unsure about Dion's performance has dropped from 46 per cent at the end of last summer to 30 per cent this month, meaning that Canadians are making up their minds about a leader who has had difficulties rallying his party behind him as well as communicating his party's positions to potential voters.

"What's really disheartening is it's almost as if everyone's made up their minds already," said the polling firm's Mario Canseco. "Those who actually have something to say about Dion are saying negative things."

The online poll of 1,004 Canadians is considered accurate to within 3.1 percentage points, 19 times in 20."

I know this news is going to upset loyal Dion supporters and there are plenty of you among Liberal bloggers. You support Dion, you stand by him faithfully and that's all very nice. What you aren't going to do is get him elected.

The election may be won or lost on Dion's leadership. Yet he's intent on transforming it into a referendum on carbon taxes. With this pleasant, well-intentioned, intelligent but hapless character at the wheel, Dion may be dooming initiatives such as carbon taxes in a vain attempt to save his own political neck.

We'll have another leader of the party but a loss on a de facto carbon tax referendum may just set back that initiative for years to come, if not permanently. Once the Canadian voters believe they have spoken, it's going to be enormously difficult for another leader to get them to change their minds.

Dion's legacy may be that of a failed leader who gambled on really bad odds and wound up dragging down the environmental initiative with him.

The carbon tax initiative is too important to be put to a referendum by a leader who can't even sell himself.

The good news. Canadians are still waiting for the LPC to come up with a leader they can support. The party can retake the government - only not until it does some essential housekeeping.
Until then it's just pissing into the wind.
Posted by The Mound of Sound at 8:10 AM

To try to sell carbon tax at this time is political suicide anyway. It will be worse for Dion. A party in power has to convince the Canadina public for the need of such a tax. To try to win election on that will be just a big fat noose - no noose is the best noose as we all know.

i CANNOT believe you would take an angus reid toronto star poll as FACT...this is a farce...it is a bunch of conservative hacks voting just as their talking points to phone in shows....I think Dion has turned things around....get off his back...Gramps..I believe you would be foolish to believe this as accurate and I am deeply disappointed in the lastest blog from RED TORY.

Mr Dion has and is the sacrificial lamb, much the same way John Turner was. There was a reason Rock/Manley/Tobin/McKenna didnt want the leadership job. Push for a fall election, keep it to a minority, resign and keep your dignity. billg

Sorry to disappoint you "Anon" but the writing is on the wall and MoS has nailed the most salient problem with Dion as confirmed by the latest poll results — which are just part of an ongoing trend. Time to man up and face the music.

I'm sorry you're so upset Anon9:14 but that can't be helped. If you don't like the TorStar poll, come up with some poll - any poll - that shows Dion has the popularity and political capital to force a referendum/election on the carbon tax idea.

At this point I'm far more concerned about the irreparable damage a Dion referendum might cause than the dismal fate that awaits him in a general election.

His job wasn't over when he won the leadership, it only began. His real job was to win the support of the electorate so he could lead the LPC back to power and no matter how much they may upset you, poll after poll have shown he doesn't have what it takes to win over the Canadian public.

So, unless you can find some way to multiply Dion-supporter votes four or five fold, you ought to do what the rest of us are doing - scouting about for someone strong enough to carry the torch.

My pick is Louise Arbour if we can get her. If not, I think we could do an awful lot worse than having Romeo Dallaire leave the senate to run for the job.

It's one thing not to be prime ministerial material but it's another altogether not to be suitable as an opposition leader.

So, Anon, please show me some indication that the Canadian public would actually vote for Dion especially on what could be a suicidal issue.

a) Well MOS, there is no internal mechanism to remove a leader that's been newly elected till after an election.. not before. And you should know this. Plus, our image as a party gets worse if we were try this stunt of dropping a leader before he's even been given the chance in a general election. Not even the famously backstabbing Tories and Reform Party stooped to that ignominy.

b) This is Angus-Reid.. its an online poll... I put little faith in them.

c) I've already seen newspapers editorials like the Gazette in Montreal praising Dion for having the political courage to present this. I think this is exactly the type of issue and the type of stand he needs to take to turn this bad image some have of him around.

d) It's a good thing bloggers weren't around in 1990-93 when Chretien was the newly elected leader of the party. The divisions in Quebec and such over him were a lot worse.. yet he toughed it out and the rest is history.

Scott, I understand there's no way to force Dion out and I wouldn't want to see an insurrection in any case. We've made our bed....

What concerns me is the prospect of Dion transforming the general election into a referendum on carbon tax. He can't sell that deal. He doesn't have the public confidence and political capital. In other words, he risks dooming the entire carbon tax initiative if he exploits it in an election. That's not right.

I realize that he's folded on just about everything else, certainly in the public's eye, but that was an obvious consequence of the decisions he's made on every confidence vote that's come along. That doesn't mean he has to screw up the GHG fight to try to save his political neck.

One more point, Scott. You hit it on the head when you wrote "I think this is exactly the type of issue and the type of stand he needs to take to turn this bad image some have of him around."

You're saying he ought to exploit this even if he can't sell it and dooms the carbon initiative in the process. That's just exploiting it as a political opportunity, not doing what's necessary to have the initiative succeed. The same feckless approach Dion used when he folded on Afghanistan.

"The carbon tax has a problem"

Whooee! It's a scary prospect, Mound. I don't like the idea of pinnin' the best hope for the environment on the worst hope for election.

We Greens have been pushin' tax-shifting and a carbon tax for years. We've tripled our polling numbers over those years and 30% of Canadians say the GPC would be best able to mange the environmental file.

A Dion loss will set back the cause of savin' ol' Mother Earth. I'm not sure whether the worst part of the setback will be the thwarting of a carbon tax or more years of a Harper's anti-Earth policies.

Then again, Dion could surprise everyone. What he needs is a Power Point roadshow with a catchy title like "An Inconvenient Tax."

"A Dion loss will set back the cause of savin' ol' Mother Earth. I'm not sure whether the worst part of the setback will be the thwarting of a carbon tax or more years of a Harper's anti-Earth policies."

Seems to me i didn't hear a lot of squealing from greens or reds when the Liberals had two consecutive majorities, and failed to 'save the earth' when they had the chance..a certain Liberal leader was a big part of that i recall..but you know, he just didn't get it done..

Well Kursk, good of you to stop by if only so we can all be reminded of the greasy little vulgarians we contend with from time to time. I was going to delete your sophomoric comments as offensive but I'll leave them up for a while so we can all get a good look at you. Kursk - that's right, blew itself up and went straight to the bottom. Good choice.

The Liberals get the most positive attention they've had in months, throw the government on the defensive, get broad-based support for Dion's proposal, and then a crappy "do you like teddy bears" online poll comes out and you want to ditch everything and run back into the cave?

That would be dumb and short-sighted.

The leadership discussion is self-defeating.

A party which can't stand sensible criticism of faulty leadership is in trouble. Not discussing these issues is what's genuinely self-defeating. I'd prefer to step out of the cave, chum. I want this party back where it belongs and that's going to require keeping our heads out of the sand.