The Abject Futility of Our War in Afghanistan 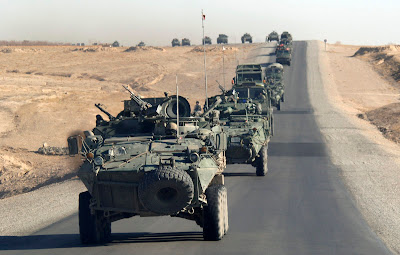 I have largely given up writing about our stupid and counterproductive war in Afghanistan but I found Chris Hedges' take on it from TruthDig worth excerpting:

...We have stumbled into a confusing mix of armed groups that include criminal gangs, drug traffickers, Pashtun and Tajik militias, kidnapping rings, death squads and mercenaries. We are embroiled in a civil war. The Pashtuns, who make up most of the Taliban and are the traditional rulers of Afghanistan, are battling the Tajiks and Uzbeks, who make up the Northern Alliance, which, with foreign help, won the civil war in 2001. The old Northern Alliance now dominates the corrupt and incompetent government. It is deeply hated. And it will fall with us.

We are losing the war in Afghanistan. When we invaded the country eight years ago the Taliban controlled about 75 percent of Afghanistan. Today its reach has crept back to about half the country. The Taliban runs the poppy trade, which brings in an annual income of about $300 million a year. It brazenly carries out attacks in Kabul, the capital, and foreigners, fearing kidnapping, rarely walk the streets of most Afghan cities. It is life-threatening to go into the countryside, where 80 percent of all Afghanis live, unless escorted by NATO troops. And intrepid reporters can interview Taliban officials in downtown coffee shops in Kabul. Osama bin Laden has, to the amusement of much of the rest of the world, become the Where's Waldo of the Middle East. Take away the bullets and the bombs and you have a Gilbert and Sullivan farce.

...We have ensured that Iraq and Afghanistan are failed states. Next on our list appears to be Pakistan. Pakistan, like Iraq and Afghanistan, is also a bizarre construct of Western powers that drew arbitrary and artificial borders, ones the clans and ethnic groups divided by these lines ignore. As Pakistan has unraveled, its army has sought legitimacy in militant Islam. It was the Pakistani military that created the Taliban. The Pakistanis determined how the billions in U.S. aid to the resistance during the war against the Soviet occupation of Afghanistan was allocated. And nearly all of it went to the most extremist wings of the Afghan resistance movement. The Taliban, in Pakistan's eyes, is not only an effective weapon to defeat foreign invaders, whether Russian or American, but is a bulwark against India. Muslim radicals in Kabul are never going to build an alliance with India against Pakistan. And India, not Afghanistan, is Pakistan's primary concern. Pakistan, no matter how many billions we give to it, will always nurture and protect the Taliban, which it knows is going to inherit Afghanistan. And the government's well-publicized battle with the Taliban in the Swat Valley of Pakistan, rather than a new beginning, is part of a choreographed charade that does nothing to break the unholy alliance.

The only way to defeat terrorist groups is to isolate them within their own societies. This requires wooing the population away from radicals. It is a political, economic and cultural war. The terrible algebra of military occupation and violence is always counterproductive to this kind of battle. It always creates more insurgents than it kills. It always legitimizes terrorism. And while we squander resources and lives, the real enemy, al-Qaida, has moved on to build networks in Indonesia, Pakistan, Somalia, Sudan and Morocco and depressed Muslim communities such as those in France's Lyon and London's Brixton area. There is no shortage of backwaters and broken patches of the Earth where al-Qaida can hide and operate. It does not need Afghanistan, and neither do we.

Afghanistan is no longer a primarily military war but a domestic political war being waged overseas by military means. We still pretend that winning in Afghanistan will strike a mortal blow at al Qaeda and thereby avenge the 9/11 attacks. We still maintain that fiction even though we know, everyone knows, it's complete nonsense. We still claim we're saving Afghanistan by fighting the Taliban while we know, everyone knows, that the country is beset by a host of lethal maladies. No point operating on a patient's heart while someone else holds a bag tightly over his head.

Ultimately, the war in Afghanistan was lost in Washington and in the capitals of every nation that joined America's crusade. It was lost to sophomoric political leadership and military careerism, a double whammy that cannot be overcome.

As I have long argued on this site, the key to defeating Islamist fundamentalism lies in the radicalization of the Arab Street. In those supposedly friendly Muslim nations, reform movements are brutally crushed by tyrants we prop up. In places like Egypt and Saudi Arabia, those who suffer the lash of tyranny feel our hand on the whip along with their own ruler's. In these conditions, to whom can they turn? That's commonly the Islamist fundamentalists who stand as the only viable resistance to the tyrants. They're the default option. They're also the side that shares the Arab peoples' fury over the Palestinian oppression as well as the Crusader's attacks on the Muslim world - Afghanistan and Iraq.

We keep putting ourselves on the wrong side of the Arab Street, in opposition to the Muslim peoples. We do the terrorists' work by driving these people into the arms of the radicals. Why are we so insistent on using firepower to impose democracy on Afghanistan while condoning strongman rule among our supposed friends? What message are we sending to Muslim people worldwide without whose support much of the terrorist threat would wither and die?

When are we going to stop bashing our heads against this wall of stupidity?
Posted by The Mound of Sound at 8:04 AM

In every colonial war since the 1940s the occupying European power has labeled the native resistance as "terrorists". Remember the Mau Mau (Kenya) or the FLN (Algeria), or dozens of others? Watch the American movie "Red Dawn" sometime to see how Americans would behave under foreign occupation. Want to end terrorism? Ending foreign occupation is much more likely to succeed than turning the occupied country into a killing field.

There are (generally) 3 stages to warfare - stage 1: bomb the hell out of everyone (the current US "MO"); stage 2: clean-up, get rid of any "stragglers" and befriend the locals (Canada & NATO) and stage 3: rebuild. For some stupid reason all 3 stages are currently being played-out in Afghanistan at the same time. And they expect progress?

How can anyone tell what they truly 'expect' any more? If you were to try to discern their objectives by their actions, it would appear that they're aiming to tread water and hope something simply breaks their way. It's more than a long shot.

I think they're waging theatrical war, essentially going through the motions to keep up appearances.

The insurgency is but one element that will determine the outcome in Afghanistan. Add to that the hopelessly corrupt and ineffectual central government, the Northern Alliance warlords, the large-scale criminal element and the drug lords and you have a powerful criminal enterprise, very tightly interwoven. Somehow we're supposed to stabilize Afghanistan by holding the insurgents at bay?

It could be argued that Afghanistan is a civil war in the midst of an intermission. Unless we dismantle the entire warlord power structure there'll never be any domestic peace but that objective isn't even on our agenda and it never will be either.

Meanwhile Pakistan is going sideways faster than anyone will admit with the Taliban extending their influence into what had been a relatively low-level insurgency in the resource-rich, southern territory of Balochistan. This region is Pakistan's sole access to the sea and also the pipeline route into Iran. With Pakistan's military drawn down defending its border with India and putting on a show against the Taliban in the northwest frontier region, it's virtually powerless to confront a Baloch uprising in the south. I doubt Pakistan will be too keen to exhaust itself struggling with the Taliban in the Pashtun regions if it means losing control of Balochistan.

Red Tory has an excellent recommendation on a book to review "After the Empire: The Breakdown of the American Order". Originally written in 2002 (Emmanuel Todd - with a European & French perspective) in 2002 and then with an American edition in 2003 (with a new and astoundingly precient Preface in this 2003 edition), it is definitiely worth a read - even for Canadian cons!

Thanks for that. I'll try to track down a copy. It sounds like a companion piece to Kevin Phillips excellent "American Theocracy."