I Heard It Through the Grapevine 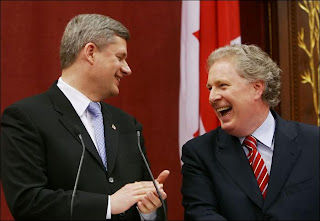 The other day our conversation turned to Stephen Harper. I mentioned I thought Harper must be getting close to quitting time. Unable to win a majority and his legislative agenda tied up in knots, why would a guy want to hang on any longer? My Tory friend said he thought Harper would leave except for the prospect of an election call this fall. Unless he manages a miracle and somehow swings a majority, Stevie will be packing his bags.

I asked what the Tory rumour-mill had on possible successors. My friend said that, up until a couple of weeks ago, Jean Charest's organization was laying the groundwork for the Quebec premier to stage a comeback. Then, it seems, some sort of health issue popped up, ending Charest's ambitions to join the ranks of Canada's prime ministers.

Interesting bit of gossip. Just thought I'd pass it along.
Posted by The Mound of Sound at 11:39 AM

Charet is the perfect Tory - he's fucked up Quebec as if he was a Con... it's only natural...