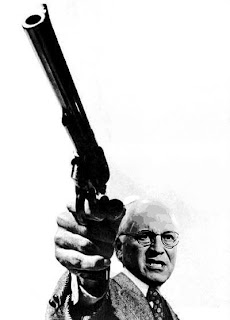 Last March, Seymour Hersh stood alone when he told an audience at the University of Minnesota that Dick Cheney had operated a secret assassination squad that he kept hidden from Congressional oversight.

"Congress has no oversight of it. It's an executive assassination ring essentially, and it's been going on and on and on. ...Under President Bush's authority, they've been going into countries, not talking to the ambassador or the CIA station chief, and finding people on a list and executing them and leaving. That's been going on, in the name of all of us."

Hersh's revelation prompted the expected raised eyebrows and high level denials - pretty much the same thing he got four decades ago when he first wrote of the My Lai massacre. And now, as then, it turns out he was right on the money.

Now the New York Times is reporting that Cheney ran the squad through the CIA but it never was successful. The assassination squad reported by Hersh was run through the Pentagon's Special Ops Command and did, he claims, leave bodies in is wake.

Hersh told the Daily Beast that the Bush regime was very active in running covert military actions in the guise of intelligence operations not requiring government oversight. Hersh claims Bush even gloated about this in his 2003 State of the Union speech when he said:

"All told, more than 3,000 suspected terrorists have been arrested in many countries. And many others have met a different fate. Let's put it this way: They are no longer a problem to the United States and our friends and allies."
Posted by The Mound of Sound at 8:47 AM