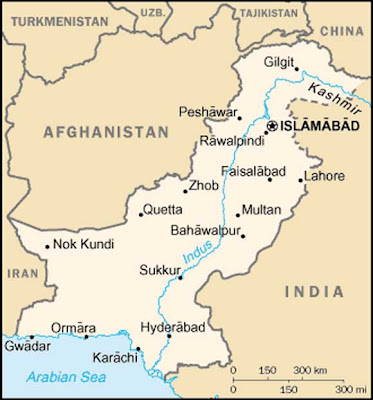 When it comes to global security, the greatest threat today may not be terrorism or nuclear proliferation either. The gravest danger may lie in the lack of a coherent American policy toward South and East Asia.

To put it simply, America is stirring the pot in Afghanistan, in Pakistan and in India with potentially destabilizing ripple effects spreading to China and Russia. America's love/hate relationship with Central and South Asia seems to have drawn it into policies that are, by turns, inconsistent and even dangerously incoherent.

American policy in this region would make plain sense if only Pakistan, nuclear armed Pakistan, didn't exist. It's when Pakistan is factored into the mix that reason and sense seem to go out the window.

Hillary Clinton is continuing the Bush administration's initiative of cozying up to India with both nuclear technology and military support and co-operation treaties. This is bound to give the Chinese fits especially given the Indian navy's stated goal of maritime supremacy from the Indian Ocean to the Sea of Japan which just happens to envelope China's entire coastline. Both nations are now furiously expanding their blue water fleets. The latest move in this arms race came this week with the launch of India's first. made-in-India nuclear missile submarine, the Arihant.

While China is remaining silent, Pakistan is openly proclaiming the Indian sub will kick off an accelerated nuclear arms race. Yeah, now there's something the world could probably do without. From the Pakistan news service, Dawn:

ISPR spokesperson for the Pakistan Navy Commander Salman Ali told Dawn on Monday the Indian move would have far-reaching destabilising effects on the security environment not only of Pakistan but also of all the littoral states of Indian Ocean and beyond. He said the induction of 6,000-tonne INS Arihant in the Indian Navy had the potential to trigger a nuclear arms race in the region and all littoral states, including Pakistan, would have to take appropriate safeguards.

Washington never hesitates to loudly demand that Pakistan turn its military forces to fighting the Taliban and securing its western border with Afghanistan. Then it collaborates with India in ways bound to make Islamabad ever more paranoid about the security along its eastern border, the one it shares with India. At the same time the United States does nothing to curb India's involvement with the Kabul government in Afghanistan, a second-front for Pakistani paranoia.

America doesn't seem to grasp that stabilizing Afghanistan won't be possible without securing Pakistan. Without the full support of Pakistan, Afghanistan is a lost cause. Without securing Pakistan, America risks creating two failed states, one of them with a nuclear arsenal. This also gives rise to a power vacuum that could well suit China's interests in meeting an emerging Indian military challenge. Just imagine a Chinese naval base on the Arabian Sea at Gwadar.

If there was ever a time demanding coherence in American foreign policy toward Asia, this is it. Unfortunately the Obama administration's foreign policy, like that of its predecessor, isn't up to the challenge.
Posted by The Mound of Sound at 9:02 AM

Mound, good analysis. Pakistan does not trust US and may develop even more closer ties with China for the sake of its own survival. I do not think Pakistan ever felt threatened by Afghanistan or Taliban. Only when India meddles into Afghanistan. It is a mess and US has to wake up to the realities of the region.

I agree that Obama is 100% wrong in his foreign policy.

I would like you to point out exactly what he should do different.

Starting with numbers 1 through 10.

I'm curious to see how you can solve this problem.

Tell me how you would solve this problem.

First (there are so many "firsts") would be to give America as clean a slate as possible. In other words, abandon what does not work and never will work.

Leave Iraq. Compel Kurds to work with Arabs, Shia to work with Sunni. Some of the unaddressed problems that beset them won't get better by buying time. There may be a valuable role for America to play during the Iraqi factions' teething period but they have to lock horns sooner or later.

Figure out what kind of Afghan government America can live with. Democracy is doomed so long as warlordism is tolerated. Only one central power could ever be capable of suppressing warlordism and countering the insurgency at the same time - military rule.

We have a very poorly formed understanding of martial rule. It conjures up visions of Zia and Pinochet. Yet there are several successful examples in Latin America where military rule permitted a transition from feudalism to democracy that otherwise would never have occured.

Keep India from meddling in Afghanistan. There's very little positive that can come of it and it is seriously destabilizing to the region.

Restore trans-Atlantic ties. The world is embarking on a potentially dangerous era in which the Western nations will have a profound mutuality of interests and needs. America can force the Western Europeans to remain at arm's length or it can genuinely accept them as its partner. That truly is a no-lose proposition.

Accept that the West will either have to fight to keep our supremacy or find ways to accommodate the needs of other nations and regions. At some point we'll travel down Road A or B. It would be better if we chose our path than if that was done for us.

Disarm, disarm, disarm. The only way to thwart nuclear proliferation is for the major nuclear powers to lead by example.

Sorry, that's all the time I have for this right now. I'll see if I can come up with a few more tomorrow.