He's Back - The Return of El Nino. 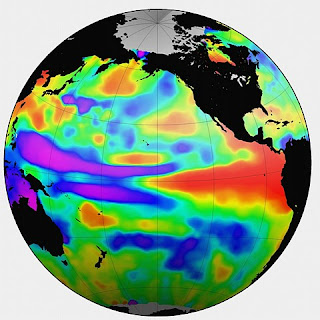 We only just managed to bid adieu to his ugly stepsister, La Nina. Was it too much to hope for a few years of normal conditions? Maybe so because he's back. El Nino is back and his oceanic presence is already being detected as far north as the Baja.

And what does El Nino hold in store for our fellow human beings? According to the United Nation's Office for Humanitarian Affairs, nothing good:

"Typically, an El Niño has the potential to disrupt the rainy seasons and cause lower rainfall in India, Australia, Southeast Asia - Philippines and Indonesia - southern Africa and Central America," said Robert Stefanski, a WMO scientific officer who works on agriculture-related weather and climate issues. "In past El Niño events, droughts have occurred and lowered food production in many of these regions."

In contrast, La Niña is the cooling of sea surface temperatures; both El Niño and La Niña are part of the normal climate cycle in the Pacific Ocean and occur once every four to seven years. According to WMO, "Recent changes are consistent with the early stages of a developing El Niño event in the second half of 2009."

It seems like we did indeed once get these phenomenon every seven years but that has changed over the past decade. Now, it seems, we're hit by them more often than not. They once were "part of the normal climate cycle in the Pacific Ocean" but now they seem to have become not just part but the climate cycle of the Pacific.

So what does all this mean for Canada? Here's a handy explanation from the University of British Columbia:

During the winter of an El Nino event, the air temperature tends to be warm over most of Canada, with the greatest warming centred around Manitoba-western Ontario, where a temperature anomaly of up to +3 degrees Celcius (averaged over the last nine El Nino events) can be found (Hoerling et al., 1997; Shabbar and Khandekar, 1996). Southern Canada also tends to be drier during an El Nino winter (Shabbar et al., 1997). Southern British Columbia tends to receive less snow (Hsieh and Tang, 1999).

In the case of the cold La Nina event-- the opposite of the warm El Nino event-- the coastal waters off British Columbia tend to be cool. In a La Nina winter, the Canadian air temperature (especially west of Quebec) tends to be below normal (Hoerling et al., 1997; Shabbar and Khandekar, 1996), while the precipitation in southern Canada tends to be above normal (Shabbar et al., 1997). Southern British Columbia tends to receive more snow (Hsieh and Tang, 1999). Poor Canadian prairie wheat harvests often follow La Nina events (Garnett and Khandekar, 1992; Hsieh et al., 1999)

Great, just what I didn't want to hear. Glancing at the CBC website I found an item suggesting that there's a new generation of El Nino emerging, a lot different from the old familiar phenom we were just getting to understand:
Changes in the nature of global weather phenomenon El Niño may be causing an increase in the total number of hurricanes as well as their likelihood of hitting land, new research suggests.
El Niño forms in the Pacific, but it affects circulation patterns across the globe — from drought in Australia, to the Indian monsoon and the number and severity of hurricanes in the Atlantic.
Conventional El Niño events involve warming in the eastern Pacific. But a new wrinkle might be emerging as a phenomenon dubbed El Niño Modoki (from the Japanese meaning "similar, but different") shows warming in the Central Pacific — similar to that which is seen during La Nina years.
"
Normally, El Niño results in diminished hurricanes in the Atlantic," said Peter Webster, a professor at Georgia Tech's School of Earth and Atmospheric Sciences, who led a research team studying the issue. "But this new type is resulting in a greater number of hurricanes with greater frequency and more potential to make landfall."

Warming in the central Pacific Ocean is associated with a greater-than-average [hurricane] frequency and increasing landfall potential along the Gulf of Mexico coast and Central America, the report said.

Changes in the characteristics of El Niño could have huge ramifications for the insurance industry, as well as making storm-ravaged areas better able to avert catastrophe.
"
This new type of El Niño is more predictable," said Webster. "We're not sure why, but this could mean that we get greater warning of hurricanes, probably by a number of months."
Posted by The Mound of Sound at 8:18 AM