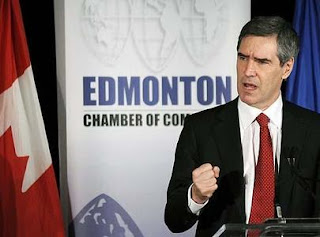 I finally got around to reading Jim Travers piece on Michael Ignatieff in the Toronto Star.

Curious that, when the rest of us were saying these very same things, we were attacked by various IgLibs for being heretical and disloyal to the party.

Our critics gushed and swooned over the new guy while he put his stamp on the Liberal Party of Canada, transforming it into what Travers quite rightly labels "conservative-lite." Liberal, indeed!

The Eaton boys were no Timothy E., David and Lenny have shown they're no Izzy, Justin is no Pierre and Ian is no Keith. I can't imagine Keith Davey allowing Pierre Trudeau to come out with something as boneheaded as boasting about putting Harper "on probation." It's not inspiring, it's not even funny. It just makes you cringe when those words come out of Mr. Ignatieff's mouth. Yet it's even featured on the party's web page. What possible advantage is to be gained from constantly reminding everyone that you're all hat and no cattle.

Leave things like Gaza and the Tar Sands out of it for a while. Where Iggy really was tested and failed miserably was when Harper managed to get the GG to prorogue parliament. He and his advisors and his caucus had two precious months to get down to business and work furiously on a stimulus and recovery budget proposal of their own. They needed to be ready when parliament returned with a budget proposal that envisioned putting "new" money into the economy on any of the long list of genuinely needed infrastructure investments that would actually generate wealth for the country and the Canadian taxpayer when the spending costs fell due.

But Ignatieff used that precious two month window of opportunity to finish writing a book. What were his advisors thinking? How did they let that happen?

When parliament returned Ignatieff was empty-handed. He brought no grand vision to lay before the public as a real alternative. Instead he had to support what I labelled a pinata budget - throwing new decks on cottages or shouldering the tax burden for municipal works projects already on the books - that did precious little to stimulate or recover and would provide no lasting investment to offset the costs of the squandered money.

Snookered by the prime minister, Ignatieff supported the pinata budget and then puffed himself up mightily and pronounced the Harper government was "on probation." What a miserable farce.

I'm still willing to support Michael Ignatieff the moment he grasps the idea that it's the Liberal Party of Canada, not the Ignatieff Party of Canada, and that the key word is Liberal. The guy is unquestionably bright but he does need skilled handlers and he needs to listen to them.

Canada cannot afford two inept leaders. There are great challenges looming that we're going to have to address, challenges that will require real vision, the sort of vision that was nowhere to be seen in the pinata budget. I believe that Michael Ignatieff is capable of that vision if he stops screwing around pandering to everybody and starts acting like a liberal.
Posted by The Mound of Sound at 9:33 AM

Right now, I image you are being labelled a heretic for speaking the truth... come next election it will be a bitter satisfaction saying "I told you so"....

Maybe M.I. imagined that his book would be so profound that it would unite Canadians?

Excellent post MoS! All this talk with zero action is tiring, & this country desperately needs to be rid of Harper & Cons. My sentiments are similar to yours. I was taken aback when I heard MI was finishing his book during prorogation - when he should have been working for the good of this country instead. And the "probation" thing is ridiculous - Harper just waltzes around it, as I knew he would. It means absolutely nothing. Tough talk without plans & action is just escaping, hot air.

I will say one thing in Ignatieff's defence. When he inherited the reins to the party, we were in no shape to go to risk going to an election. I personally would have liked to have seen him go ahead with the coalition, but the public support wasn't there.

As much as I liked Dion, Iggy has done a better job of APPEARING stronger. It's pure posturing, but at least he does not come off as somebody that Harper can bully (or at least not as much). The party will be ready for an election in the fall, and then it'll be Harper's turn to run for the hills.

Now if only we could get Ignatieff to tell us where he stands on a few issues, and then get him to stick to those positions we'd be all set!

Why Fish, I think we've seen where Mr. Ignatieff stands on key issues from the Middle East to the Athabasca Tar Sands to the current recession and the government's response.

In his approach to the Tar Sands, for example, Mr. Ignatieff has made it plain that he sees a carbon economy as central to Canada's prosperity, a keystone to national unity, for the balance of this century. That places him, along with Mr. Harper, on the opposite side of just about everybody else on this planet.

Even if the Alberta government was able to meet its carbon capture goals, that's still only 20%, making Athabasca bitumen the filthiest fossil fuel on the planet and it's downright filthy BEFORE it ever gets poured into somebody's SUV.

C'mon Fish, you've been to law school and everything. You can grasp this.

He rushed to unequivocally support the Israeli assault on Gaza without waiting to see what was really happening on the ground. Even Harper sat comfortably mute thanks to being taken off the Hook by Ignatieff. And what have we learned since then from Palestinians, the UN, various NGOs, the Red Cross and many Israeli soldiers who served in that campaign? It is to everything these people have revealed that Mr. Ignatieff has firmly and unconditionally lashed the Liberal Party of Canada.

"Harper's turn to run for the hills"? Despite his endless flaws and shortcomings, Steve Harper has outgamed every Liberal team since Martin's.

No, I don't think Harper will be run out of town. I think he'll leave on his own terms. I would expect that sooner rather than later. I think Harper's horribly inept behaviour lately reflects a guy who's definitely not playing his "A" game.

What would possibly keep Harper in the job except some real prospect of winning a majority and that's not in the cards.

He's so far behind the curve on global warming that, even with the best and brightest at EnviroCan utterly gagged, he can't hide it much longer. He has bought as much time as possible. He's done an excellent job for the Oil Patch. It's not his fault that world prices cratered with the global meltdown. But time is running out.

Now think, Fish, think. Harper's hand will soon be forced on the climate change issue. He's going to have to set realistic and meaningful targets and he'll have to begin introducing measures to meet those. To his base that will be like shoving cloves of garlic down a vampire's throat. Do you really believe he, or the right wing of his party, want to be the people to deliver that up to their followers?

What have they got to lose by losing to Ignatieff right now? MI's already shown that he's willing to leave Canada's political centre far to the right (mission accomplished, point- Mr. Harper) and he'll be easy to attack as the successor to Dion when he has no choice but to introduce some form of carbon emissions controls.

Copenhagen is but six months away, the End Times are nigh. I think Harp's ready to pack his bags on a moment's notice and I don't think the Libs are remotely ready to deal with the vacuum he'll bequeath them.

I hope he reads your blog.