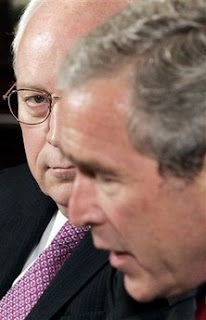 Much of what Dick Cheney did during the Bush years was hidden from the public's eye. The Dick did a lot of quirky things to keep it that way. Remember when he claimed he didn't have to disclose anything because the office of the vice president wasn't even part of the government, not even the executive branch? This guy didn't merely operate beneath the radar, he took a sledgehammer to the radar screen.

One activity the Dick worked furiously to keep secret was his White House Energy Task Force especially during the early years when Enron's Ken Lay actually had a desk in the White House.

Now Jason Leopold, editor of The Public Record, reveals that one of the issues high on the agenda of Cheney's energy task force was invading Iraq:

Two years before the invasion of Iraq, oil executives and foreign policy advisers told the Bush administration that the United States would remain "a prisoner of its energy dilemma" as long as Saddam Hussein was in power.

That April 2001 report, "Strategic Policy Challenges for the 21st Century," was prepared by the James A. Baker Institute for Public Policy and the US Council on Foreign Relations at the request of then-Vice President Dick Cheney.

By March 2001, Cheney's task force had prepared a set of documents with a map of Iraqi oilfields, pipelines, refineries and terminals, as well as two charts detailing Iraqi oil and gas projects, and a list titled "Foreign Suitors for Iraqi Oilfield Contracts," according to information released in July 2003 under a Freedom of Information Act lawsuit filed by the conservative watchdog group Judicial Watch.

So, when Bush and Cheney and everybody else in the criminal enterprise known as the Bush Administration assured Americans and the world that the invasion of Iraq had nothing to do with oil, they were merely doing what they did best - they were lying through their teeth. It wasn't weapons of mass destruction that Cheney wanted to pry from Saddam's fingers, it was Iraq's oil.

These are facts known to every American as well as the rest world before the invasion.
The real disturbing question is how is that entire nations get turned into herds of sheep and...who does the turning. 5 million refugees and 1/2 million dead Iraqis later America is consumed with mourning Michael Jackson and otherwise could give a .... for Iraq.