But Where Are They Now - What Happened To Those Detainees? 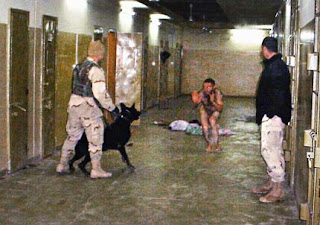 There's no doubt anymore, no matter how hard the Harper Cons shut their eyes and stomp their feet, that Afghan detainees captured by understrength Canadian troops and handed over to Afghan authorities were tortured. The important word is the last one - "tortured."

That Afghan authorities would resort to torture should be a given. The fine points of human rights have never been vigorously embraced in warlord-driven societies and by governments assessed as "criminal enterprises."

It would have been a different story had Canada held the detainees in a Canadian POW facility but you can't have everything when you're trying to wage war on half a shoestring. As our bemedalled jackasses at home put in publicity appearances at Stanley Cup hockey games not once did they use their celebrity to tell Canadians that they needed a lot more troops to handle Kandahar. No, they left their soldiers - the grunts they're supposedly so devoted to - to make do without enough of anything. (And from everything I read, the media were fully complicit in this; going along to get along) But I digress.

What I want to know is just where are those detainees today? In our civilized notion of war, detainees are either released or they're imprisoned in a POW facility. Yet it doesn't appear that our civilized rules of war are widely embraced among the Afghan authorities. If they rob their own villagers and bugger those villagers' young sons in public, what fate befalls suspected Taliban insurgents who spend months or even years in some Afghan gulag?

By some accounts, a lot of captured Taliban fighters are simply released on payments of bribes, shuffled out the back door to fight and kill again. What about innocent villagers mistakenly detained? Who pays their bribes? How many of the detainees are quietly disposed of when we've finally lost interest? How many of the detainees that we've captured and logged over the years are still being held and in what condition? How many have been released and why?

Accounts of the secret prisons operated by American authorities in Afghanistan including the infamous Salt Pit, Black jail and Dark prison suggest that the Afghans aren't the only torturers who've plied their trade over there.

I've begun making enquiries of outfits such as Human Rights Watch to try and get some answers to the questions I've raised here.

What seems obvious is that, if you deal with the butcher, you have to be prepared to pay the Butcher's Price.
Posted by The Mound of Sound at 6:14 AM