Something Rotten in the State of Denmark? 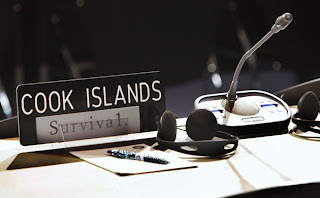 Copenhagen is unravelling. The rich nations (aka the "major emitters") and the African nations are at loggerheads with the Africans accusing the West of trying to subvert Kyoto at their expense. From The Guardian:

The confrontation in Copenhagen began when the Africa group called a press conference in the Bella centre. Seven countries, led by Algeria and including South Africa and Nigeria, said that rich countries were trying to collapse the Kyoto protocol.

This followed moves by Japan, Australia and other rich countries at the weekend who argued that a new single treaty had to be presented to heads of state to be signed.

Developing countries fear that rich nations will ensure that a new treaty will not place strict and legally binding commitments on the developed countries to cut their emissions, unlike the Kyoto protocol.

Victor Fodeke, head of the Nigerian special climate change unit, said any attempt to remove the Kyoto track would be disastrous for the talks. "Africa is on death row. It has been sidelined by some countries. If there is any attempt to remove one of the tracks of negotiations, then it's obvious the train will crash."

"This is of paramount importance. We cannot, we can never accept the killing of the Kyoto protocol. It will mean the killing of Africa," said another spokesman for the group.

And there's the nub of it, the narrative that could come back to haunt us, the idea that we in the richest nations are inflicting devastation upon the poorest and that we're utterly indifferent to their suffering. That's the sort of message that can radicalize people, particularly when it's true.
Posted by The Mound of Sound at 6:54 AM