Climate Change - Look At It This Way 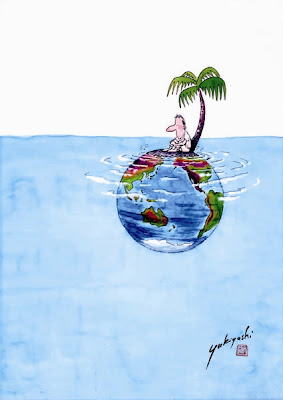 The denialists have been as busy as a mining camp hooker on payday in the runup to the Copenhagen climate summit. All of the bright lights of the denialist/skeptic community have been making the rounds, sowing doubt and dissent to undermine the overwhelming scientific consensus that man-made global warming has reached a critical point at which it presents an existential threat to our very civilization if not halted and reversed.

A telling aspect of these denialists is the lack of coherence and consensus in their narrative. When it comes to opinions, they're all over the board and, in fact, they often contradict or even dismiss each other's claims. Some accept the warming part, others contend the earth is cooling; some see change as man-made, others point to natural causes; some see the science as valid, others see a grand global conspiracy to perpetrate a hoax.. the list goes on and on. The Guardian has published a summary of some key skeptic/denialists and their scattershot opinions. If you don't like the idea that the global warming theory is true, well there's something for everybody at the Denialists' Bazaar. Help yourself.

The newspaper also published a companion piece setting out some expert thoughts that just might help you inform your opinion on the global warming problem and what we must do about it. Here are a couple of passages I thought helpful.

Benjamin Habib, visiting fellow, Flinders University, Adelaide, Australia is of the view that the upshot of global warming is that we must abandon the perpetual economic growth paradigm:

This is extremely confronting to conservatives, who by definition prefer the status quo. When presented with this reality, it is easier for them to deny the existence of global warming outright. The light version of denial is adopted by the techno-fix crowd, who believe that new technologies or an alternative energy source will allow us to maintain growing economies indefinitely. The laws of physics, chemistry and biology dictate that proponents of both positions are fundamentally mistaken. The only viable solutions are ones which acknowledge the obvious limits of the Earth as a closed, finite system. Unfortunately this is a practical, psychological and spiritual task for which conservatives are ill-prepared.

Professor emeritus Peter Gardiner argues that we really need to see our way through the confusion sowed by the Denialists:

...deniers use the inherent uncertainty of scientific data to suggest that risk is therefore equally uncertain and in some way balanced. But it isn't. Acting unnecessarily on carbon reduction risks a few percent of GDP. Not acting risks catastrophe, global economic warfare, starvation and bloodshed.

Not everyone understands Bernoulli's principle, or demands proof that aeroplane wings create lift. Planes are flying, after all. So why deny climate change? Polar ice is melting, after all. Each of 20 other streams of evidence is equally compelling. And if some climate change is from natural CO2 sources, why exacerbate the problem, using oil which will run out anyway, just as we ruin the planet?

You can only stuff so many college students into a Volkswagen. You can stuff only so much greenhouse gas into our atmosphere. Accepting that fact makes the argument for carbon budgeting instead of a hodgepodge of conditional emissions reductions targets obscured by a layer of cap and trade nonsense. Another term for carbon budgeting is carbon rationing. Budgeting is rationing and, like it or not, we're heading there if we're to have any hope of avoiding the worst.
Posted by The Mound of Sound at 6:18 AM

You just can't reason with them because their "opinions" are the same as their (religious) faith to them. It just can't be questioned or reasoned out. Hence why it is that when you try to do so, they wall their minds further to facts and evidence and become "emotional" in order to reject more forcefully anyone or anything trying to make them see reason - and this is what intellectual sloth is all about.

This is how primitive minds function.

It's slowly dawning on me that we have allowed the denialists free rein to spread debilitating fear. That's in large part because the global warming science community has so abjectly failed to present a coherent, credible vision of what a world committed to effective action would look like.

The denialists say fighting global warming will be the end of jobs, the end of prosperity, the end of all the enjoyable aspects of our society. It will trigger a massive transfer of wealth to underserving "have nots."

No one spends much time countering that. This gives rise to the "deer in the headlights" paralysis. People are afraid to jump because no one is assuring them there's a safe depth of water in the pool below them.

It is going to take courage for societies to take this leap of faith and that, in turn, requires a level of leadership that's awfully scarce today.

"The denialists have been as busy as a mining camp hooker on payday in the runup to the Copenhagen climate summit."

MOS why have you compared Climate Change denialists to a woman as in hooker. A hooker is still a woman. You have done this kind of comparison before. It's offensive.

Sorry Jingles. You're right, my comparison is demeaning of hookers (the odd one I've actually had as a client). They unquestionably have more integrity and self-respect - they really do.