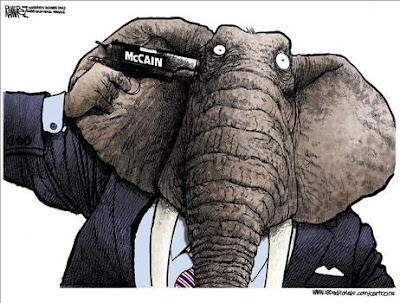 In case you haven't noticed it, Obama's healthcare victory, modest as it was, has sent Republicans and Republicanism wildly spinning and off kilter. The Republican movement is purging its ranks of intellectuals, leaving more room for the guiding wisdom it takes from Limbaugh and Beck and Hannity. Republicanism has become a pathology and, if you don't believe that, take a look at this excerpt I found at a medical web site:

"Republicanism" is a symptom of mental illness characterized by a radical change in personality and a distorted or diminished sense of objective reality.

Patients suffering from advanced Republicanism are unable to distinguish the real from the unreal. They experience hallucinations and/or delusions that they believe are real, and they typically behave in an inappropriate and confused manner.

A mental illness can exhibited through various forms of Republicanism, such as:

Delusions. An unshakable and irrational belief in something untrue (see "birthers, tea bagging, climate change denialism"). Delusions defy normal reasoning, and remain firm even when overwhelming proof is presented to disprove them.

Hallucinations. Republicanism causes false or distorted sensory experience that appear to be real.

Disorganized or catatonic behavior. Behavior that is completely inappropriate to the situation or environment. Catatonic patients have either a complete lack of or inappropriate excess of motor activity. They can be completely rigid and unable to move (vegetative or "McCainism"), or in constant motion (Limbaugh Spasm disorder). Disorganized behavior is unpredictable and inappropriate for a situation (such as screaming obscenities in the middle of class or at Fox News).
Posted by The Mound of Sound at 7:59 AM

Most serious cases are:

I can go on but these are few examples.

No question about those characters. What's particularly troubling is the angry way the Right is purging itself of conservative intellectuals. Frum got the boot but he wasn't the first and he won't be the last. Anyone on the inside who points to the rot is ejected. When all that remains are the madmen, what does that hold for the United States and her allies?

Le Daro: I can think of Canadian examples: More than half of the Blogging Tories, Stevie and his Harpercons themselves...

As far as David Frum is concerned he should go into rehab right away.

is there a cure?

Some are terminal case and some do recover.

To be serious, OEM, I believe there is a cure - time and change.

Today's radical Republicanism seems rooted in social Darwinism, "I've got mine buddy, you get yours the best way you know how." The anti-tax phobia we see in the Teabagger movement is the sort of thing that flourishes in the hangover of a period of sustained (apparent) prosperity.

Americans drank themselves silly over the past three decades during their Age of Reagan/Age of Ruin which saw the USA transform from creditor into debtor, from producer into consumer. Now they're finding themselves awash in empties and staring at a huge tab. The party's over and they're in no mood to be compassionate or generous. They're scared.

The Age of Reagan promoted an era of perceived individualism. I use "perceived" because there was an awful lot of illusion and delusion behind it.

It's relatively easy to stand tall as an individual when money is free, when you believe your home is a giant automatic teller machine, a cornucopia of wealth, a money tree there for the plucking. But that is nothing more than a bubble and, when it bursts as it eventually must, a great deal of quite understandable yet often irrational fear sets in. The lifeboat may be in pieces but some insist on clinging to an oar rather than swim to the nearby shore.

Reality is irresistable. You can deny it, hold it at bay, for quite a while in the right circumstances but it never goes far away because reality has no place to go. Accepting the return of reality to its rightful place can be an unsettling, traumatic, even painful process but resisting it is akin to fighting gravity.

There are some who believe Obama's healthcare initiative will spark a tide change in American society. If the public come to embrace it as good for them, not just as individuals but as members of their communities, they'll have to question the anger and fear with which they greeted it at the outset. This could usher in an era of progressivism.

Remember it was a century ago that the Progressive movement took hold in America in response to the predations of the far Right. That steered America's social values right up to the arrival of that "B" movie star who treated the country like it was a sound stage.

America is going to have to get through the hangover of the Reagan bacchanal and, barring extreme global change in the meantime, I'm betting they will.