Harper promised that His Canada would punch above her weight on the global scene, and he was right.  Oh sure he got us ramped up on a futile, inconclusive foreign war, but our true behemoth status is in greenhouse gas emissions.   Miniscule little Canada, with our 35-million population, is the 8th largest emitter in the world.  We're 35th in population, just behind Poland and Algeria but we're still ahead of Uganda and Morocco.  We're almost a full third the size of Mexico.   But size doesn't really matter when you're Numero Ocho.

Besides, Canada lags ahead in eight place only on total emissions.    Compare us on per capita emissions and then we're a real contender for the finals. 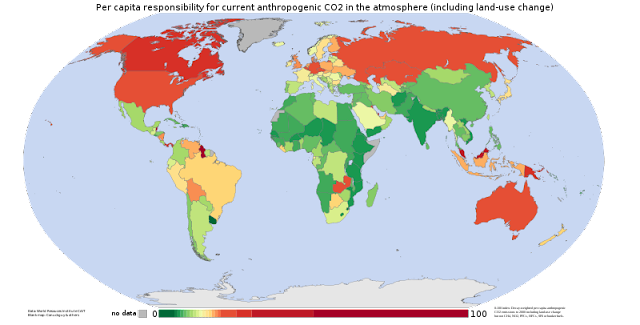 Following the UN climate change summit in Durban there was good news from Harper EnviroShill and Grand Dissembler, Peter Kent.   While the 194-party conference is still clinging to hope that an emissions treaty of some sort can be put into effect by 2020, Minister Kant said he's optimistic a climate change agreement can be struck by 2015.   In the same breath our Ruler's Dissembler added that Canada is walking away from its Kyoto commitments and won't be squandering "scarce dollars" on a global fund to help developing countries mitigate the impacts of climate change.   Apparently Kent didn't actually use the words, "let'em tread water," but his point was unmistakeable.

Climate Action Network Canada's Hanna McKinnon said Kent ensured Canada's legacy as the "poster child of inaction" at the climate change talks.   Kent's suggestion there could be a viable treaty by 2015 would be a bald-faced lie if he weren't part of a government for which truth is anything you choose to believe, not something you have reason to believe.

What the Harper regime's actions depressingly reveal is that global warming is still to be treated as a political issue, not a scientific problem.   And it is in the political forum that effective action on remediation, mitigation and adaptation will be smothered by kindly voices.
Posted by The Mound of Sound at 9:09 AM

Have you checked out the Aussie reaction to their implementation of a tax protocol ?

You're not going to sell 'sensible restraint' when people are 1) spooked by economic crisis 2) realizing any such action moves industry/jobs from compliant nations to polluting ones ; natural reaction to market forces.
Meantime real provable issues are ignored while people try to make others 'see the light' about proposals that purport to predict the future. That is an innately impossible project even if some figures are later found correct - plus fudge factors are rampant in 'climate science.'

Maybe we should consider

I keep files to stimulate interest and investigation

Unfortunately, Opit, we're kicking our problems down the road for future generations to cope with. We consider cleaning up our own mess to be an imposition on our right to consume everything we can earn and borrow enough to acquire.

A few days ago an old friend, a veteran Tory insider, volunteered that it saddened him to know that, in their lifetimes, his grandchildren would come to despise his generation for what we have done to them.

We were so ashamed, when at this meeting of "climate change", of all places and times. Harper was bullying country's, into accepting the dirty tar oil. What a disgraceful, idiotic gall.

Other country's are starting to shun Harper. They said, Harper is a petty gasbag, stubborn, arrogant, impossible to work with, and co-operates with no-one. Harper lost Canada's seat in the U.N.

Harper had a many times convicted American felon working for him. Felon Carson and his ex prostitute girlfriend, were guests in Harper's home.

Harper rewarded Gordon Campbell, with the High Commissioner to England, for doing Harper's dirty work for him. Campbell has the dirtiest, most corrupt and foul political record in this Nations history.

The people of BC are supporting the F.N. people, to stop the Enbridge pipeline and the dirty oil tankers from China. We don't want that filthy crap, any where near our province. Enbridge has had, 840 pipe bursts.

Harper has been out and out lying, about Canada's greenhouse emissions, to the entire world. Lying to Europe and saying, the dirty tar oil is clean energy.

Harper's manner towards the First Nations People, has been very demeaning and out and out cruel. This has angered many BC citizens. We don't want Harper to turn BC into a polluted wasteland.