Will the Next US President Heed the Constitution? 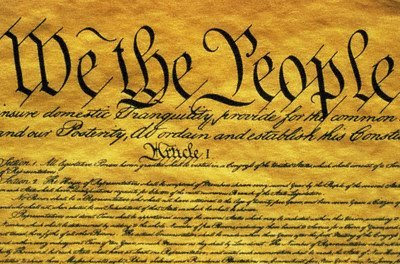 If only the United States was governed by its Constitution it could be a wonderful country again. But, despite all the fanciful oaths they've taken, the members of the Bush regime have gone out of their way to circumvent or subvert the very instrument they've sworn to uphold.

Thumbing their noses at the most basic principles of the Rule of Law, Bush and his troll, Cheney, have introduced arrest without charge, secret trials, torture, illegal war, warrantless spying on American citizens and many other abuses, all cloaked behind a veil of decidedly unconstitutional secrecy.

It is lamentable that the US Congress lacks the will to impeach Bush and Cheney but the prospect of obtaining a 2/3rds majority in the Senate needed to convict is unfathomable when the Repuglicans are going into the coming election with a presidential candidate who embraces the core policies of this administration. To impeach Bush or Cheney would require a measure of repudiation of their policies and tactics that could ultimately sink John McCain long before November ticks along.

The grounds for impeachment, stated in the 1886 trial of Andrew Johnson, were the subject of some debate: ''An impeachable high crime or misdemeanor is one in its nature or consequences subversive of some fundamental or essential principle of government or highly prejudicial to the public interest, and this may consist of a violation of the Constitution, of law, of an official oath, or of duty, by an act committed or omitted, or, without violating a positive law, by the abuse of discretionary powers from improper motives or for an improper purpose.''

Yet without some powerful congressional censure there exists the prospect that Bush/Cheney may stand as a precedent for a seismic shift in America's system of checks and balances in favour of the executive branch. The nation's chief lawmaker then stands above the law and America's constitutional democracy is maimed.

Why is no one directly asking Barack Obama and Hillary Clinton and John McCain if they will pledge to restore the integrity of the US Constitution should they become president? Why are they not being challenged to undertake to reverse the abuses of the Bush regime and support legislative amendments to ensure they cannot be repeated?

The existing punk administration has defied the Constitution. Isn't it vital that Americans should vote for a president who won't follow suit? For if a second presidency embraces the constitutional abuses of the Bush regime it will become much harder to restore American democracy afterward.
Posted by The Mound of Sound at 5:03 PM

Email ThisBlogThis!Share to TwitterShare to FacebookShare to Pinterest
Labels: American election, US constitution

As usual, right on.

Hi LD and thanks. There have been wilful presidential abuses of the US constitution before. Nixon and Reagan come to mind. But there's never been a chief executive who has gone so far in breaching the principle law of America as to actually shift the checks and balances that the US government needs to stay on course.

Hey Mound . . . tell us what part of the US constitution covers "Terrorists"???
Even Jimmy Cahter listened to incoming phone calls, the CIA has waterboardered folks for decades . . . nothin new here.
Exactly which articles did they breach???
Unlike the leftist loonies that want to confiscate firearms . . . in direct conflict with the second amendment. The roe vs wade thing that is based on complete legal nonsense . . . another leftist fantasy.
Then there the loonies that won't even deal with the Mexican border and the millions of illegals in the US . . . .
Are you a deciple of Charlie Sheen??