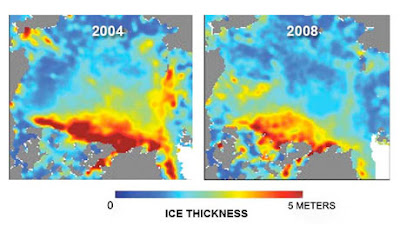 NASA has released satellite measurements of the thickness of Arctic sea ice, comparing 2004 to 2008. From The Guardian:
The Earth is going thin on top. A new study has revealed that the Arctic Ocean's permanent blanket of ice around the North Pole has thinned by more than 40% since 2004.
Scientists said the rapid loss was "remarkable" and could force experts to reassess how quickly the Arctic ice in the summer may disappear completely. They blame the loss on global warming, which has driven temperatures in the Arctic to record highs and summer ice extent to recent lows.
...Ron Kwok, senior research scientist at Nasa's Jet Propulsion Laboratory in California, said: "Even in years when the overall extent of sea ice remains stable or grows slightly, the thickness and volume of the ice cover is continuing to decline, making the ice more vulnerable to continued shrinkage."
Posted by The Mound of Sound at 8:14 AM

The Voice of Reason said...

are these graphics reversed or mislabled? doesn't it look like the ice is thicker in the more recent image on the right? or at the least less red and yellow? it's very confusing.

The bar graph beneath the images indicates the thickest ice to be red. There's much less of that in the 2008 image.

The Voice of Reason said...

my bad. for some reason i associate red with heat... and i don't read.