What's it gonna be?   Will Harper weld the manhole cover shut on election financing?  Will he shut down any effort to clean up the Tar Sands?  Will he transform the public and armed services into agencies of the Conservative Party?  Will he shove two-tier healthcare down our throats?  Will he shred what remains of our social safety net?  Will he synchronize Canada to America's wishes?  Will he festoon the landscape with mega-prisons?  Will the most authoritarian prime minister in living memory sabotage what remains of our democracy?

Oh, I forgot, Jack Layton's going to stop him.   Whew, what a relief!

I don't know where Harper will begin but I do know what's coming to us in British Columbia.   Long before we get another trip to the polls, we're going to have a privately owned and operated supertanker port in Kitimat and a pipeline drawing toxic bitumen sludge out of the Tar Sands.

Who can forget the Exxon Valdez fiasco in Alaska's Prince William Sound?  That supertanker was only loaded with Alaskan crude oil, not utterly toxic, highly corrosive, bitumen sludge. 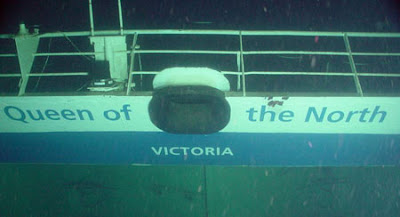 Just around the corner from where the Queen of the North rests on the seabed hundreds of feet below the surface, we're going to have a supertanker port that will enrich Alberta and Big Oil and leave British Columbians holding the bag for the awful risks.

Rafe Mair puts it most aptly:

As the old saying has it, if the only tool you have is a hammer, every problem looks like a nail. So it is with us who have taken environmental issues on as a lifetime issue. It’s not that we don’t see, understand and have passion for other issues – rather that we see the environment being urgent. If we get it wrong over the next few years – and the BC government and the Harper government have got it wrong – then the damage is forever. You simply cannot restore wild salmon runs or erase the damage of a catastrophic oil spill. On the economic side of the environment issue, if you lose your public power to private interests as we seem determined to do, it’s gone forever.

Harper wants nothing more than to forfeit public power to private interests, his permanent solution and we're just going to have to sit by and watch.
Posted by The Mound of Sound at 9:53 AM

Email ThisBlogThis!Share to TwitterShare to FacebookShare to Pinterest
Labels: BC environment

Why do you think the idea of Jack checking Harper is comical? Do you suggest it is more comical than the idea of Ignatieff checkiing Harper?

It is what it is.

It's foolish to "blame Jack" for a Tory majority. The citizens who voted gave the Tories a majority, no one else.

Jacques, I don't blame Jack alone for assisting Harper to get his majority but he certainly played a significant role. He helped Harper unseat Martin. He shamelessly helped Harper toss Dion. Last night was just a continuation of Layton's perfidy.

What we needed in this election was to stop the very outcome we got. Essential to that effort was the opposition parties focusing entirely on Harper and nothing else. That's what Ignatieff was doing until Jack made his move to undermine the Libs. So don't give me any of this convenient bullshit that Jack's hand wasn't in Harper's majority. It damn well was.

And the little prick will be utterly ineffective against Harper's powerful majority. Then again he's happiest doing his little peacock routine. Harper is despotic but Layton is a scumbag.

Harper didn't toss Dion. The Liberal backroom tossed Dion. They were flabbergasted from the moment he won the leadership, undermined him at every turn, and finally elbowed him out rather than let him become Prime Minister in a coalition. Jack Layton, to the contrary, was willing to join with him in government.

PLG - are you nuts? Layton, siding with Harper, clubbed Dion over the head with his Green Shift policy in the 2008 election. The sad thing is it was actually the only way to get our carbon problem under control.

"Conservative strategist and communications adviser Jamie Watt put it well when he described Opposition Leader Jack Layton as the man who gets to ask the first question the prime minister won't answer."

Based on news I've seen today. James Moore has the goggles on and the acetylene ready.

The tanker port is an issue that is incredibly volatile. That pipeline is going to be attacked, repeatedly, and that won't be stopped. They will generate a lot of sympathy - and support - especially among coastal British Columbians.

The Tories have benefited enormously by this issue remaining simmering in the background. There's also a lack of awareness of what is to be shipped out. It's not merely crude oil. It's a very toxic, highly corrosive sludge of bitumen diluted with crude oil to make it able to be pumped through a pipeline.

The more the public learns about this, probably in the wake of the first civil disobedience, the angrier they'll be. Harper is counting on being able to hand them a fait accompli.

Mound maybe it's time you learn facebook and setup a page about the kitimat port...

tell you what, Anon. If you want to start posting this stuff on Facebook, be my guest. I have enough trouble just coping with Blogger.