A lot of the world's population is concentrated in low-lying coastal regions.  These are areas vulnerable to the sea level rise of up to 1.6 meters now predicted by the turn of the century.

The Japanese are living with a preview of those very conditions.   The recent earthquakes pulled the country out and down into the sea.   Some areas, according to The Japan Times, sank 1.2 meters. 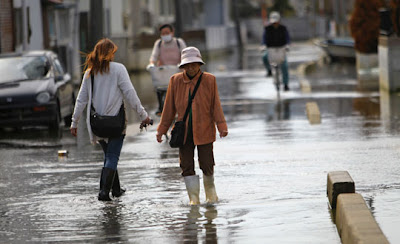 When water begins to trickle down the streets of her coastal neighborhood, Yoshiko Takahashi knows it is time to hurry home.


Twice a day, the flow steadily increases until it is knee-deep, carrying fish and debris by her front door and trapping people in their homes. Those still on the streets slosh through the seawater in rubber boots or on a bicycle.
"I look out the window, and it's like our houses are in the middle of the ocean," says Takahashi, who moved in three years ago.
...In port cities such as Onagawa and Kesennuma, Miyagi Prefecture, the tide flows in and out among crumpled homes and warehouses along now uninhabited streets.
A cluster of neighborhoods in the city of Ishinomaki is rare in that it escaped tsunami damage through fortuitous geography. So, many residents still live in their homes, and they now face a daily trial: The area floods at high tide, and the normally sleepy streets turn frantic as residents rush home before the water rises too high.
...Most houses sit above the water's reach, but travel by car becomes impossible and the sewage system swamps, rendering toilets unusable.
Scientists say the new conditions are permanent.
This is the impact of tides on areas of subsidence.   It doesn't begin to reflect what these areas will endure from future storm surges.   These areas are essentially uninhabitable.   Their value has dropped to zero leaving homeowners with no assets and enormous debts yet having to relocate.
What are we doing in Canada to prepare for this coming reality?   An awful lot of precious little.
Posted by The Mound of Sound at 11:40 AM