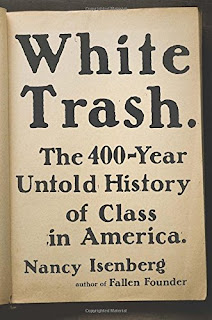 Today they're loosely gathered as the Tea Party. A decade or two before that they were called White Trash. To America's founding fathers they were were called "manure" or "offscourings" a term for human faeces. They're as American as apple pie.

Isenberg ...makes a persuasive case that 16th century England saw North America not as a source of wealth like Mexico and Peru, but as a dump. Colonization advocates like Richard Hakluyt proposed exporting petty criminals, prostitutes and those who were simply poor, just to get them out of the way.

Hakluyt and his colleagues saw them as "manure," better exploited overseas than costing money in British jails. Their function would be to clear land and push the Aboriginals back. The survivors would breed new generations that could be impressed into the army and navy as cannon fodder.

...They were "squatters" and "crackers" (derived from the expression "crack a fart"). They were human waste, trash -- at best, compost to support worthier people.

Poor whites had formed a kind of slave class in the early years of the colonies, before Africans largely displaced them. They weren't even considered much use. Their children were malnourished and sick. Today we would call them stunted, kept from full physical and intellectual growth by lack of food.

...The Founding Fathers believed in class and race divisions as sincerely as anyone. Equally sincerely, they believed their own class had been bred to rule; "democracy" was a dirty word. Thomas Jefferson, the principal author of the American colonies' Declaration of Independence, supported a vague ideal of "yeomen" farmers, free whites who would support their families on their own land, fight the wars of the ruling class, but never challenge their rulers.

The reality, of course, was a handful of great landowners employing a landless class of poor whites, and not a yeoman in sight. (The great 18th century criticism of slavery was that it undercut poor whites' willingness to do the same work done by slaves.)

...As Isenberg notes, poor whites were able "to refashion the redneck and embrace white trash as an authentic heritage." By the end of the 20th century, Bill Clinton (a white trash Rhodes Scholar) was both president and "Slick Willie," attracting voters by entertaining them with his sax playing and his sexual adventures. Then came Sarah Palin, and now Donald Trump.

But these were all exceptions. Most poor whites settled for regular blue-collar jobs. When the economy became stagnant in the 1980s, they saw their real incomes stagnate also -- assuming their jobs didn't move to Mexico or China. They found themselves competing for jobs with black people.

As Lyndon B. Johnson once observed, "If you can convince the lowest white man he's better than the best colored man, he won't notice you're picking his pocket. Hell, give him somebody to look down on, and he'll empty his pockets for you."

...Some working-class whites who go into police work bring such an attitude with them and find it often intensified by police culture itself. Hence the tendency of white American police officers to shoot black American civilians in disproportionate numbers: 102 unarmed blacks in 2015, five times the rate of killing unarmed whites. Black hostility to police is therefore predictable.

The current spate of police killings, and the killing of five Dallas police officers by a black army reservist with mental health problems, are also predictable. Isenberg's book, a chronicle of deaths foretold, shows how such violence became not only predictable but a way of life.

What is impossible to predict is a way out of this four-century nightmare.
Posted by The Mound of Sound at 12:58 PM

Shovelling out paupers is a phrase I remember concerning the Irish underclass during th Famine.

These are some of my paternal ancestors. My dad left the US in '46, became a Canadian in the mid '50s and was reluctant and uncomfortable about going back to visit family for the rest of his life.

I was joking with my brother about this (in a sardonic and cynical manner, which makes it all okay), about how the damn British just keep driving, pushing, and chasing the Irish ever westward.

The old ex-pat British political class still in control of the US know exactly what buttons to push to get the appropriate response out of their old foes/servants. Know all too well.

Unfortunately, Mound, some people are only secure if they can look down on others.

Parts of my lineage trace back a couple of centuries in Ontario, hard core Anglican/Presbyterian types. Two significant groups that settled Ontario were United Empire Loyalists, mid to upper-crust American colonists, and Highland Scots expelled during The Clearances. Irish Catholics were definitely viewed with suspicion, if not at times hostility, and that was alive and well into my father's generation.

Histories of the War of 1812 shows the role white trash Americans played in that conflict. Particularly fierce and brutal were the infantry regiments raised in Kentucky and Tennessee. These were frontiersmen who had a particular hatred of the natives who fought alongside the Brits. There were two unfortunate incidents, the River Raison massacre was one, in which prisoners from these regiments were left in the custody of Tecumseh's forces who took their revenge on them.

What is "red state" America but "white trash" America? Appalachia, the 'slave states', the Ozarks, Arkansas, Oklahoma, the lot. The movie "gangs of New York" is closely based on the book of the same name. It's an eye-opener. Then there's the lighter side such as the Beverly Hillbillies - white, poor, ignorant with just the faintest suggestion of maybe incest.

Trump would be able to hold his rallies in union halls if it wasn't for white trash Americans packing his venues. There it is.