When You Seem to Have Tried Everything 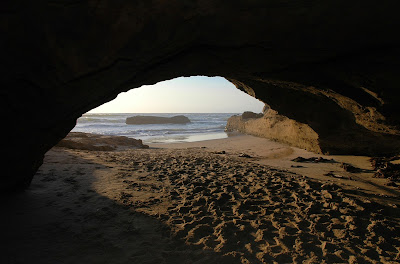 They want us out of their backyards. Maybe that's a good idea. Why should we continue on with a murderous pissing contest that we cannot end?

Sometimes it's best to stop howling and just walk away.

I'm talking to you, Europe. It's time to write this one off. There'll be no good coming your way from the Middle East or even North Africa much longer. Time for what they call a legal separation.

How do you go about that? You could start by breaking your dependency on folks you just can't get along with. Why do you need them anyway? Oh yeah, energy. Oil. Well then how about you stop buying their oil? What better time could there be than to engineer a switch to clean alternative energy? Harness the wind and the sun. You've already shown you know how to do that very successfully. Finish the job.

And both parties will need a restraining order. They'll direct both of you to stay out of each other's territories. That begins with you getting your tanks and your warplanes and your ships out of their world. Then, and only then, can you put your mind to The Wall.

The Chinese understood the need for it. So too did Roman Emperor Hadrian.

Here's the thing. You know you're going to have to mount some perimeter defence sooner or later. Climate change alone will drive mass migrations out of Africa and the Middle East. You don't have enough food in your pantry or chairs at your table to handle that. You're already in "overloaded lifeboat" mode. It's a horrible thought having to repel boarders knowing the fate that awaits them but you can't take them all. You can't even take most.

Back in the closing years of the last century - hey, anybody remember those good old days? - the British magazine, The Economist, had a cover story about Europe's future dealings with the Middle East and Africa. I think the caption was "barbarians at the gate." It envisioned a future in which foreign traders were allowed up to the portcullis, just not inside the castle walls. Trading would be done outside at places of exchange. Goods would flow freely but people would not.

From this bastion of small town Vancouver Island this all sounds surreal. What seemed like a bizarre notion when I read that issue of The Economist now confronts Europe as reality.

The Muslim world is going to have to settle its own hash. Sunni versus Shiite, Arab versus non-Arab, all the little squabbles and long-term resentments, sectarian, ethnic and tribal - we cannot fix that. When we get involved we never come away with the outcomes we sought going in. Then again most of our involvement has been more about securing our perceived interests than fixing theirs. Meanwhile NATO remains in the corner vainly trying to get a winning score on the Whack-a-Mole machine.

So, my Euro friends, get building those wind generators and solar farms. Get busy switching your infrastructure to electricity from fossil fuels. Figure out how much of the E.U. is defensible and establish your frontiers along those borders. Place a moratorium, hopefully temporary, on travel to and from the Middle East and North Africa. Meanwhile at home you've still got a lot of work to do to restore public confidence in liberal democracy. That's going to take some doing.

One more thing. If the terrorism troubles continue, you tell every king, prince, emir and sheikh in the Persian Gulf states that you'll hold them personally responsible. This is their monster. They are our Dr. Frankenstein. Every time you're attacked, send a few cruise missiles to one of those magnificent palaces. Obliterate a few. See if these troubles don't mysteriously stop.
Posted by The Mound of Sound at 7:56 AM

I'm afraid it's too late to pull up the drawbridge. Two of the three latest major attacks in France - Charlie Hebdo and Bataclan - were the work of home-grown malcontents. Nice was the work of a long-time resident. Sending a cruise missile to Riyadh isn't going to improve conditions in the banlieues of Paris, Brussels or Nice.

This is colonialism come home to roost. Cheap labour was brought in from African and Middle Eastern former colonies to fuel economic expansion. But with the offshoring of manufacturing and automation of what's left, these people and their families were tossed on the dung heap. Until you address that problem, there's a lot more attacks to come.

lol: "The Chinese understood the need for it. So too did Roman Emperor Hadrian." Except, neither the Chinese, nor Hadrians walls worked for half their intended purpose (keeping out the savage hordes). They DID work for their other purpose. Propaganda value. Interesting choice of policies there.


I think you're a bit off Matthew. The walls did, at times, fail. The Chinese wall failed when traitors allowed barbarians to pass through the gates. On the other hand the wall did provide a defended route for safe movement of troops. As for Hadrian's Wall, it regulated passage and facilitated the collection of taxes and prevention of smuggling.


The internal threat, Cap, is a police/intelligence function. That's law enforcement. Severing the causeways that tie Europe to the ME and North Africa is a different matter. I grew up in an era taking international mobility for granted but, then again, the global population was a bearable 2.5 billion when I was hatched and has tripled since then. Hence the overloaded lifeboat paradox. Many things that would have once offended my refined, liberal sensibilities have now become inescapable reality.