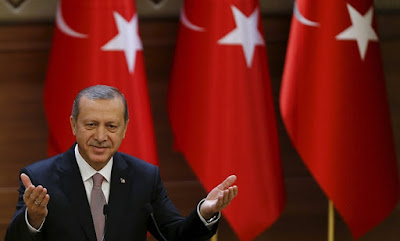 At long last the Turkish generals have turned on strongman Recep Erdogan.

Traffic has been stopped from crossing both the Bosphorus and Fatih Sultan Mehmet bridges in Istanbul.

There are reports of gunshots in the capital Ankara.

Other reports said soldiers were inside buildings of the Turkish state broadcaster in Ankara.

CNN Turk reported that President Recep Tayyip Erdogan was "safe" but did not elaborate.

A statement from the military group read out on NTV television said: "The power in the country has been seized in its entirety." Who represents the group remains uncertain.

All coups can be wild and wooly affairs for the first 24 to 48 hours and this one is a big unknown. It's possible for officers loyal to Erdogan to state a counter-coup but this would be the fourth time the military, which sees itself as the "guardian of [secular] democracy" in that country has overthrown a civilian government.

Erdogan, in a move befitting a dictator, treated himself to a lovely $350-million, 1000-room presidential palace complex built in the midst of a nature preserve. 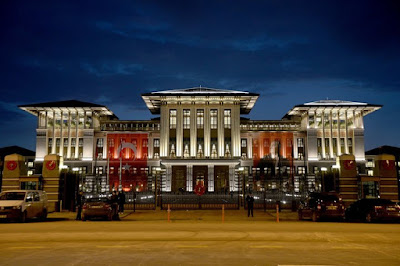 I wonder if the CIA has a hand in this. Erdogan had become a giant liability to the "West".

BBC Radio 5 live is reporting that Mosques are pressuring people to go to public places and protest the coup.

Let's just hope that the CIA has done a better job of covering its tracks this time than it did in Venezuela and Ukraine.


I have been wondering for almost two years when the generals would rise up against Erdogan. They are the only reason Turkey accepted democracy. Erdogan was restoring Islamism and recently seemed to fashion himself as the next Ottoman ruler. His government gagged the press, took over the major newspaper and broadcast services, stifled and defied the Constitutional Court and suppressed the military.

Erdogan's early years were impressive and he led Turkey well. It's been the past four years or so where he's turned against secular democracy and toward something else while driving his people to the brink of civil war. He had to go.


I'm sure the mosques will do about anything to oppose the restoration of a secular democracy in Turkey.


Has there been any evidence of CIA involvement in this coup?

Amazing...
CIA working hand-in-hand with ГРУ.
I would say that this would be one time when military junta is better than democratically elected govt...
A..non


There are new reports suggesting the coup may be over almost as quickly as it began. Erdogan has apparently flown in to Turkey's Ataturk airport, something he'd never dare do if the plotters were in control. Sounds as if the military must be divided.

A failure of the coup would probably incite Erdogan to tighten his control, possibly taking absolute power. He's almost there already. We may be witnessing the rebirth of the Ottoman Empire (only without the "empire" bit, at least not for now).

"So who are the Gülenists? Gülen, a cleric living in exile in Pennsylvania, leads a popular movement – Hizmet or “the service” – ostensibly campaigning for democratic accountability."

Maybe the CIA suggestion is not as fanciful as I first thought.

Have to agree with you Mound this bastard Erdogon will consolidate what power he hasn't got now, so fast the Country will not realise what has been done.

An absolute Islamic tyrant, convinced he is the next Ottoman. I fear for the secular Turks, perhaps on the road to the misery of Egypt.

Coup in Ukraine good, coup in Turkey and insult to democracy.

The coup was over too quickly.
Too noisey(jets flying overhead,for what)
Seemingly too disorganised.
Too quickly put down considering the divisions within Turkey.

Right on Anon, the coup was probably an Erdogon setup designed to acquire more powers and establish an Erdogan State which will be fundamentalist. Problem is that the EU will not accept such a state for membership.

Newspaper taken over by the Turkish Government.
It 'was' a decent source of middle east news.