What Could Possibly Go Wrong?

The Republican convention in Cleveland is less than a week away. In choosing an Ohio venue, the GOP is taking their pow wow into an "open carry" state. That means it's legal to carry an arsenal slung over your shoulder or tucked in your belt just so you can always prevent a takeover by a tyrannical government.

So, guess who's coming to dinner when the Repugs gather at Payday Loans Coliseum? One group will be the New Black Panthers and, yes, they'll be showing up loaded for bear.

The New Black Panther Party, a "black power" movement, will carry firearms for self-defense during rallies in Cleveland ahead of next week's Republican convention, if allowed under Ohio law, the group's chairman said.

The plan by the group this weekend comes as police in Cleveland brace for an influx of groups that plan demonstrations before and during the presidential nominating convention.

During the attack last week in Dallas that killed five police officers, law enforcement officials said demonstrators carrying rifles led them to initially believe they were under attack by multiple shooters.

Several other groups, including some supporters of presumptive Republican presidential nominee Donald Trump, have said they will carry weapons in Cleveland.

"If it is an open state to carry, we will exercise our second amendment rights because there are other groups threatening to be there that are threatening to do harm to us," Hashim Nzinga, chairman of the New Black Panther Party, told Reuters in a telephone interview.

...Officials in Ohio have said it will be legal for protesters to carry weapons at demonstrations outside the convention under that state’s "open carry" law, which allows civilians to carry guns in public.

Sounds like the Republicans have all the makings to stage a "shoot-out at the Payday Loans Corral." Black Panthers armed to the teeth squaring off against members of Trump's loyal White Trash Tea Party movement. Throw in a hot day, a few cases of cheap beer, and there's no telling what could happen. 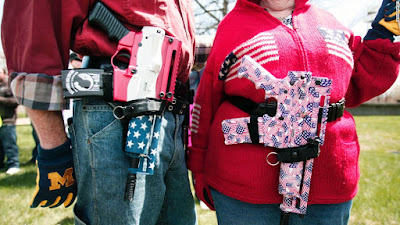 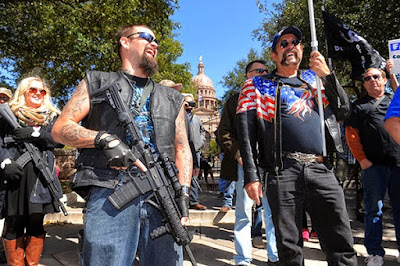 As the nutjobs descend on Cleveland, The New Republic reports that the city and its police force, now under federal oversight, are bracing for disaster.

Many have noted that Cleveland will be the first city to host a national political convention while its police force is under federal oversight for past bad acts. But that observation alone undersells how radically your world has been pulled inside-out if you wear a blue uniform. The [12-year old Tamir]Rice shooting and consent decree triggered a complete rewiring of a police department that’s operated with little oversight and few consequences for more than 50 years. Under the federal decree, the Cleveland PD is gradually changing its policies and practices after generations of engaging in racist behavior, producing sloppy internal investigations, and escalating routine police work into matters of life and death. It’s slow, painful surgery that will continue into the 2020s. And now, with its hoped-for transformation far from complete, the Cleveland PD is about to come under the hot lights of intense national media scrutiny.

The stakes and pressure couldn’t be cranked higher for the city’s troubled cops as they face the ultimate daunting task—refereeing a roughhouse political melee featuring a polarizing candidate, potential convention floor drama, guerilla clown protestors, Brexit anti-heroes, gun-toting white supremacists, gun-toting black militants, “patriotic” bikers, and an estimated 50,000 more. And we don’t know which Cleveland Police Department we’ll be getting if the 2016 RNC becomes a black-eye ideological thunderdome a la Chicago in 1968—the old, or the new?

As I said, what could possibly go wrong?
Posted by The Mound of Sound at 7:03 AM

Praise the lord and pass the ammuniton.

Perhaps the third American civil war is about to start?

Isn't open carry predicated on the idea that people will be much more polite to one another if they're all packing?

Going to be interesting, if not exactly fun, to watch. If the networks don't cut the feeds. They've done it before. Back in October 2002, while the protests against invading Afghanistan were happening, there were somewhere north of 100,000 people protesting around the White House and it didn't appear anywhere on any network or in any newspaper.

They're turning Cleveland into Tombstone.

Insanity, thy name is America...

well perhaps the plan is to assassinate the donald.
My money is on the Koch brothers as the orchestrators of this scheme

Pamela, you should check out the update I just posted about how the Cleveland police are in disarray. Mind boggling.