This time it matters. The issue is the deadly business that could lurk behind China's refusal to accept the judgment of the international tribunal of The Hague over claims to territorial sovereignty in the South China Sea.

None of the fiercely disputed Spratly Islands, the UN body found, were “capable of generating extended maritime zones … [and] having found that none of the features claimed by China was capable of generating an exclusive economic zone, the tribunal found that it could — without delimiting a boundary — declare that certain sea areas are within the exclusive economic zone of the Philippines, because those areas are not overlapped by any possible entitlement of China.”

The tribunal found that China had violated the Philippines’ sovereign rights in its exclusive economic zone by interfering with Philippine fishing and petroleum exploration, constructing artificial islands and failing to prevent Chinese fishermen from fishing in the zone. At Scarborough Shoal, where it said fishermen from the Philippines and China had traditional fishing rights, it said China had restricted these rights. It added that China had created a serious risk of collision when its patrol boats had physically obstructed Philippine fishing vessels. 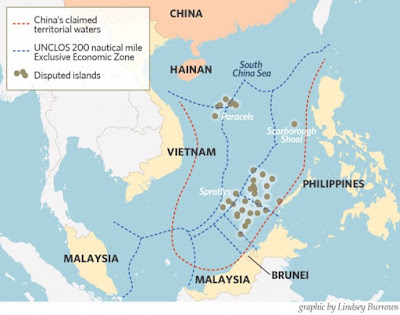 The tribunal also condemned China’s land reclamation projects and its construction of artificial islands at seven features in the Spratly Islands, concluding that it had caused “severe harm to the coral reef environment and violated its obligation to preserve and protect fragile ecosystems and the habitat of depleted, threatened, or endangered species”.

Why sanctions? Well, it's a lot better than inching ever closer to war in the South China Sea. The military buildup there - Chinese, American as well as most of the nation states of the Asia-Pacific region is massive. Even the city state of Singapore is acquiring a fleet of modern attack subs. The region has already witnessed many incidents of provocation including China's construction of artificial islands on reefs complete with air strips and missile defence batteries. In Japan, Abe's recent victory in both houses has observers suspecting Japan will soon restore its full military capability, constitutionally muzzled since Japan's surrender in WWII.

Canada has a direct interest in this. China has already said that it is entitled to Arctic Ocean seabed resources and says that the rules of the law of the sea are of no application to Arctic waters. China has also declared that it intends to maintain a permanent and substantial military presence in the Arctic. There's something that needs to be nipped in the bud.

The race for what's left. Resources in the seabed for sure.

But I suspect (and the US knows) that this cheeky-over-reach is a negotiating position related to protecting the route of the 'new silk road' (maritime version).
... there is an amazing land/mostly rail based version too.

Can't blame them given the history of western aggression and the way the US can manipulate Philippines etc. Don't forget 'The Pivot' is every bit as provocative as the silly NATO bear-baiting going on in and around the Ukraine.

as far as " violating international law" seems to me Blair & Bush did worse.


I sure hope you're right, NPoV. It's a situation like this, however, that could drag in the Chinese military's "century of humiliation" fixation.

Hear hear, I donna wanna be a enuch.