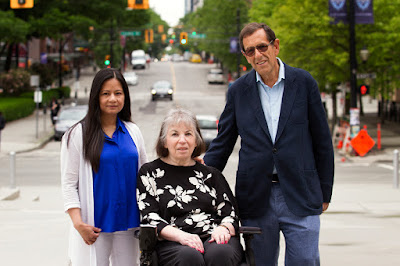 Howard Shapray is widely known as a great guy, a fine lawyer and a devoted father and husband. After a lengthy struggle with incurable disease, Howard's wife, Elayne, ended her life with the assistance of a physician. Elayne Shapray was a witness in the Carter case where, in a 9-0 per curiam decision, the Supreme Court of Canada upheld the right to physician assisted death.

Howard penned a tribute to Elayne, her good works, her lengthy battles and her death, on her own terms, in her own time. Those who don't understand the Carter decision or who, like the government of the day, can't muster the courage to follow the clear law of our land, need to learn about Elayne and what she and her family went through.
Posted by The Mound of Sound at 11:12 AM