Is Putin Plotting to Scuttle Hillary? 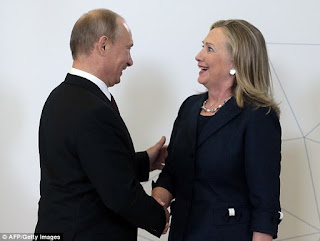 There are various media reports indicating that the Kremlin is preparing a massive leak of Hillary Clinton's unauthorized emails.

The rumour is the Russians intercepted or somehow hacked some 20,000 of Clinton's "other server" emails that the Kremlin may pass along to WikiLeaks. Presumably the Russians don't consider Ms. Clinton's indiscretions as innocuous as she contends.

Putin, Trump? One New York magazine suggests there might be some reason Putin would favour Trump over Clinton.

Donald Trump is not a Russian agent in the sense that Philip and Elizabeth from The Americans are Russian agents. There’s no hidden radio in his laundry room where he transmits secrets to the Kremlin. But his relationship with Russia is disturbing and lends itself to frightening interpretations.

Franklin Foer has detailed the connections between the Republican nominee and the Kremlin. In short, it includes a long series of economic and social ties, which fit the pattern Vladimir Putin has used to infiltrate and undermine governments elsewhere — including in Ukraine, a coup Putin pulled off through Paul Manafort, who is now Trump’s campaign manager. Michael Crowley and Julia Ioffe have both described how the Russian propaganda apparatus has thrown itself behind Trump’s campaign.
Posted by The Mound of Sound at 2:22 PM

Even if the Russians did release her emails, they are by no means 'scuttling' her - she did that to herself when she insisted on having a private unsecured email server to conduct official State Department affairs.

Don't take my word for it. Read it for yourself -

It's all in the OIG report (the IG BTW is Steve Linick, a John Kerry appointee, so no issues of partisan tricks here).

Hillary Clinton is a FAR bigger danger to the United States than her strawman Trump - read the report to find out why.

It has occurred to me that a Trump win (and maybe the weird Tory Brexit win) could lead to US-Russia alliance of sorts. Trump's politics are more at home in Russia than democratic Europe.

I would expect that, from Putin's perspective, he sees Hillary as a far greater problem for Russia than a Trump presidency. He might even see Trump as an instrument to spread a bit of chaos across the USA. If Trump did seek some accommodation with Putin I expect he'd find that "The Art of the Deal" isn't what he imagined when dealing with the Kremlin.

A really good take on that other challenge to Western power...

There's an old saying: revenge is a dish best served...

I wouldn't imagine Putin to be displeased in any shape or form to be giving a nice sharp jab to Clinton's campaign. Considering he 'has no soul', he might even be pleased by this.

But like it's already been said earlier in the comments, this was all self-inflicted by Clinton.

If Putin has her email, he might keep it as ammunition in reserve, in case she wins.

If there is a Republican congress, they may be able to use whatever is in these mails to seriously wound her (if not impeach her). If there is a Democratic congress, releasing the emails before the mid-term elections could help the Republicans retake congress, and perhaps later, the Presidency.

(Putin isn't in the Repubican's camp: it is just that Hillary and Obama are fervent members of the neo-con/Liberal Interventionist cabal. There are others in both parties who are not.)

It would not be hard to conclude that Billary made $100 of millions dealing in US secrects. If the Russkies can make this an issue, it will sink her.