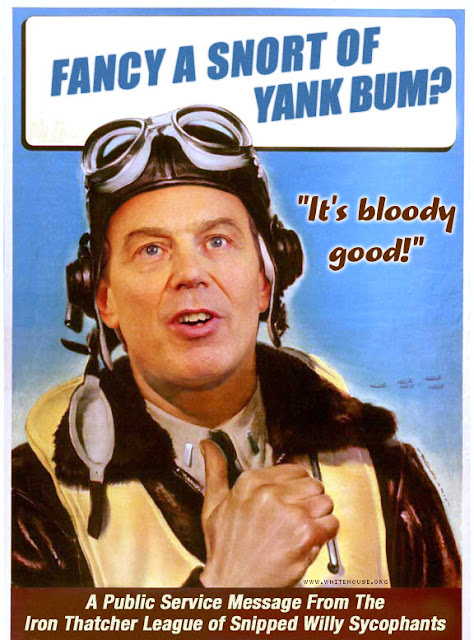 As I've pored over press reports and analysis of the Chilcot report into Britain's bungled invasion of Iraq, I can't get Stephen Harper out of my mind. Had he been prime minister at the time, Harper would have eagerly deployed Canadian forces to the campaign. He was all about "standing shoulder to shoulder" with our traditional (i.e. white, English-speaking) allies - the UK, the US, Australia.

Chilcot has exposed the Blair and Bush regimes as a gaggle of incompetents. Their Iraq War was FUBAR before the first tank crossed into Mesopotamia. There's been no peace in that country, or that region, ever since. If anything, the Crusaders have provided the petri dish in which have flourished al Qaeda, ISIL, al Nusra and the larger Sunni v. Shiite conflict waiting to break out.

The message, to me, seems clear. When America, or American-led coalitions (including NATO) come knocking, ask questions first. Don't just say, "okay, I'm in." These people are bunglers.

If the massively violent history of this new century has proven anything - persistently, repeatedly, conclusively - it's that All the King's Horses and All the King's Men are not enough to win militarily and politically significant victories. Look around. The bombing campaign to liberate Kosovo (NATO). Check out Kosovo today and you can call that a failure. Libya (NATO)? Failure. Afghanistan (NATO Plus)? That was more than a failure. It was a defeat. We lost. Canadian forces were defeated. For what? Iraq, now Iraq/Syria? We claim victories, that ISIS is getting pushed back, driven out. Remember when we had the Taliban run out of Afghanistan? How long did that last?

Fighting wars is easy. Winning is the tricky part and, these days, there are plenty of supposed leaders keen on waging wars without a clue how to win them.

So, what's the lesson for Canada from Chilcot? How about this? The next time the phone rings and it's the White House or NATO looking for warplanes or troops for this place or that, assume you've got Tony Blair on the other end of the line after he's spent an afternoon with a bottle of Bristol cream sherry. Don't ask them about the fighting. Ask them what they've got in mind to win it. How? When? What is the exit strategy? If they haven't got convincing answers to those questions, tell them - politely - you'll have to get back to them.
Posted by The Mound of Sound at 7:50 AM

There will be no lessons learned from politicians or the establishment. It was all by design -

1) to keep that area a perpetual hotbed of war, violence and death
2) and lots of money to be transferred from various Western nations' poor and middle class over to the rich and powerful in the form tax cuts, subsidies, and transfer of taxes to fund war.

The only way it can be ever stopped is when people en masse act counter to the establishment.

It's easy to get into a war, Mound. It's hard to get out. It always has been.


When it comes to military policy, we resemble automatons. We ride to the sound of the guns. Canada is sending a brigade of troops to Latvia? What for? Because Justin's bromance was irresistible? Because NATO thought it was a good idea that eastern European NATO members be given a pass so that old school NATO members could again carry the load?

I find it hard to believe that Blair is still saying the war was justified, and that the world is now a safer place. Is he planning an insanity defense should the day ever come when he is indicted as a war criminal?


He has to be worried about the prospect of being arrested somewhere and put on trial, Lorne. Most countries maintain the right to prosecute war criminals even where there is no connection between the crime and the prosecuting state. Blair, in other words, could be in legal jeopardy should he come to Canada.

When you see him today he's plainly gutted. He parrots the same nonsense that no one believes any more. He knows his excuses aren't working. From the day he met president 43 his life has gone steadily downhill. He had dreams of helping Washington implement a new world order only to see it go up in flames before his own eyes.

He's a tragic figure but one utterly undeserving of our sympathy.

Shakspeare taught us to love tragic figures. Blair is not one. He is a repulsive personality, driven by a weak intellect and absent moral foundation.

I doubt Bliar would be in much trouble in Canada. After they left office, we've hosted George W Bush, Bill Clinton, Henry Kissinger and a whole host of high-ranking Israelis without any of them being arrested and put on trial.

Only the cowardly Dick Cheney felt the risk of visiting was too much and spared us his torture advocacy. I guess nobody told him that a war crimes prosecution requires the written authorization of the Attorney General, and getting that's as likely as Jason Kenney getting laid.

It was no FUBAR. CV SoG got it right: "It was all by design."
Those criminals BEHIND the scene planned for continuous violence in the Middle East. Tony & george likely only partially understood the depth of the future quagmire and the resulting atrocities. But they understood well enough to rot in prison for the rest of their lives...
A..non

Blair will never stand trial; he joins the ranks of other 'western' mass murderers such as Clinton and Kissinger amongst the many.

Due to his eloquent speeches Blair was within the mass media put forth as another Churchill.
Only the masses need for a ,yet another, saviour gave him rise to the top.
To those with suspicious minds of those with small feet that that seek large shoes Blair was nothing more than a British version of Rex Murphy ; another person that reads the dictionary rather than a novel before bed.

The once Methodist Blair converted to Catholicism perhaps as an outlet to confess his, many, sins.

Rest assure we and our offspring will live with the results of Blair, Bush Cheney, Rumsfeld et al for decades or more to come.

Consider the sources of the war, primarily the USA and the UK.
Consider the weapons systems of these countries; the F35 and the UK Trident nuclear missile "defence".
Both are completely dependent upon the 'good will' of the USA.

Let us now consider the ramifications of the Ukraine and Syria situations!

.. if we can have town hall meetings & factual consideration re electoral reform.. options, variations etc re representation.. from all provinces, regions, ridings.. you might think going to war would get the same consideration.. non ? Oh.. maybe not? But people die in wars.. and not so much during elections, however crooked, fixed or twisted they may be..in Canada eh ..

We elect MPP's provincially, and MP's federally.. last I looked, we do not elect political parties per se.. & certainly not to enact their 'policies' flavor of the week, to muzzle science or biology or media, or 'grow the economy uber alles' to feed the Chinese or Asian economies uber alles .. strip our resources, quash species & habitat, poison our waters, air and environment.. and as you've pointed out.. sally forth to war with zero consultation or buy in, from the citizenry.. ie the electorate or constituents who elected these whackos..

Hopefully I am never served in a lawsuit via Ezra the excerable.. or Rob Anders.. or Ray Novak.. or Arthur Hamilton or Peter Kent, Jenni Byrne, Tom Flanagan or Ken Boessenkool or the Bad Man who's gone.. Harper himself.... but to think these phony wannabe Canadians deem themselves as responsible proxies with no permission.. to send Canadian Forces overseas.. beggers belief.. that our Forces may travel to 'the front' or to 'advisory only' roles via aged aircraft, sinking subs, tired old frigates with approx zero replenishment (supply train) is simply stunning.. no. Shocking. We get photo op idiocy from the likes of Harper or Kenney.. the one in false camo & insignia, the other in a business suit..

'We' are currently going to Latvia .. or other related border areas. to intimidate Russian agression ..

Cannot remember what model of contemporary Main Battle Tanks we bring to the salient ..
Nor do I recall wnar level of Harpoon missile we can currently deploy.. (launch)

If the saying.. 'he who rides the tiger, dare not dismount' is truism ..
.. we are unable to even approach the beast .. much less mount it
Hell, we have serious trouble even identifying 'the beast'

I'm curious Mound. I wonder how many of the leaders whose countries belong to NATO have actually fought in a war? Very few, if any.Instead they have lived their lives in peace and prosperity because many of the previous political leaders, did fight in WW11 and watched millions die first hand. There is something wrong when men like Tony Blair can send men/woman off to kill people they have never met living in a country they have never been to. Worst still, these mindless modern day chicken hawks who start the wars, are in control of the destiny of those who are actually fighting the war.

I , for one, cannot think of any modern day western leader that has either served , fought or had an offspring do so.
Many have avoided active service , others make sure their offspring do the same.
Far too many elected leaders seem too taken with the USA Hail to the Chief song/battle hymn.
I think it's difficult , perhaps impossible to get into the minds of such people as Blair.
His motives would seem more ego, self serving than responsible, realistic .
A mad man perhaps?