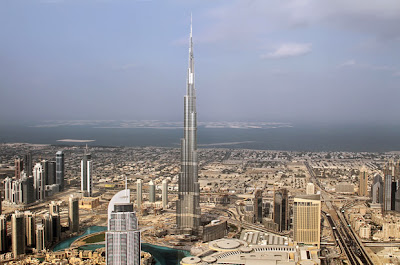 It wasn't supposed to end this way. The Emirate of Dubai was supposed to be the playground of billionaires, not their graveyard. For a decade or more, Dubai spent like there was no tomorrow - artificial island neighbourhoods crafted to resemble palm trees, the most opulent hotels on the planet, even the world's tallest man made structure, the Burj Dubai pictured above.

Then world oil prices collapsed and, along with that, so did Dubai's notional wealth. Stock markets around the world took a hit as Dubai announced that Dubai World, the government's investment company is suspending payments to creditors for up to six months. From The Telegraph:

Dubai has been among the most dramatic victims of the credit crunch, with property prices halving from their highs in September 2008, leaving a huge overhang of debt. Dubai borrowed $80bn in a four-year construction spree designed to turn its economy into a Middle Eastern powerhouse of finance and tourism.

Dubai World is one of the emirate's main state holding companies and said on Thursday that it was asking for a delay on debt until at least May 30. One of its subsidiaries, the "palm island" developer Nakheel, is due a $3.52bn Islamic bond repayment, plus charges, on December 14.
Posted by The Mound of Sound at 11:06 PM

Email ThisBlogThis!Share to TwitterShare to FacebookShare to Pinterest
Labels: Dubai

Well I guess the recession is still not over yet. I think more problem will start to surface