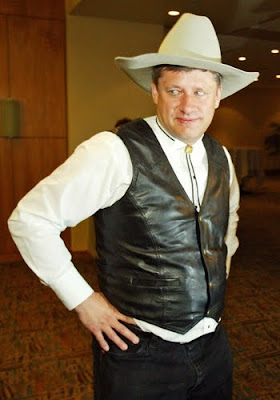 That must be why Steve is so determined to get to the bottom of this business about Afghan detainee torture, right? What's that you say? Steve doesn't want to get to the bottom of this? He doesn't even want to talk about it? His henchmen have spent years trying to ensure that no one else talks about it either? Sort of like, erase the tapes and all that? Just like Nixon?

But we've got experts now, law professors who specialize in this sort of thing, maintaining that the powers that be in Ottawa may have been party to serious war crimes. War crimes! Oh, oh never mind. I get it. Steve isn't interested in all crime and he's especially not interested in war crime, especially when it seems to involve his office and his underlings.

Move along now. Nothing to see here.
Posted by The Mound of Sound at 4:35 PM

He will probably hit the polls at
50% next poll..that is how many imbeciles we have running around.

Hey Cari, I'm an optimist, I say 44%
There will be another song and dance from Harper soon.
A Christmas pageant?
Will he be Joseph, a shepherd,an angel, the one who knocks up Mary?
Leader of the Wisemen?